Shade vows to 'be a part of this city going forward' 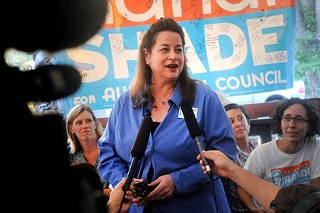 "I've been a part of Austin for my 20-plus years here. ... I love this city, and this city's been great to me, and I intend to be a part of this city going forward, in many, many ways."

Those were some of Randi Shade's parting words Saturday night at El Arroyo, as the incumbent Place 3 council member conceded that her run-off race against challenger Kathie Tovo had met defeat. The final margin was an imposing 12% – slightly better than her 13-percentage-point second-place finish in the general election with two other candidates (Max Nofziger and Kris Bailey) preventing an outright victory for Tovo. Nevertheless, Shade reiterated her conviction that the decision to continue into the run-off was the right one and that she had done her best to define the differences between herself and Tovo. "These were long odds, and I'm so glad that we stayed in this race," she told her supporters, tightly grouped on the El Arroyo deck a little after 9pm. "We have a lot to be proud of in terms of the record we have in the last couple of years at City Hall. I want to express my thanks to everybody. It's not because of hard work [that we've lost]; there just weren't enough of us to get out and vote. I'm really proud of our effort."

Shade added that she had called Tovo to congratulate her. "We need great leadership, we have great things ahead of us, we're a great community, and I look forward to being a big part of it going forward," Shade said. "Again, I wish her the very best – it's been an incredible experience for me, and I know that it will be for her as well."

A couple of hours before the polls closed and still working the field, Shade had been cautiously optimistic. "Everybody's telling me it's going to be extremely close," she said in a brief phone interview. "So we're doing everything we can to turn out voters this afternoon, and we're just going to hope for the best." That optimism held very early at El Arroyo, but by the time Shade arrived, about 7:30pm, the early voting numbers had been posted and showed Tovo up by 10 points. "Obviously, I had hoped we would be in a better position going into today's vote," Shade said, "but we've run a great campaign, we've gotten many more people to vote, and we'll just have to wait for today's votes to come in." In the end, the indeed unlikely outcome that more people voted in the single-race run-off than in the three-race May 14 general election would be Shade's only moral victory.

Indeed, the early voting numbers told the tale – election day numbers normally track the early voting numbers closely, and this was no exception – Tovo only widened her margin as the evening wore on. Considering the early votes, Shade campaign manager Katherine Haenschen said, it appeared that the jump in run-off numbers had increased numerical support in voting strongholds for both candidates but had not altered the basic margins. "Both campaigns fired up their supporters," said Haenschen, "so they came out in larger numbers for both sides."

Even early on, there was little illusion among the Shade supporters present that she faced anything other than an uphill climb. Mayor Lee Leffingwell called the early numbers "very disappointing," adding, "normally, you don't see much difference between the early vote percentages and the final vote. This has been an unusual year – but I don't want to seem like I'm optimistic because I'm not." Council Member Chris Riley noted that Shade faced a daunting margin to make up and said he was "encouraged that there was better turnout for early voting." His expectations going forward? "I've known Kathie a long time and would be glad to work with her. At the same time, I would be sorry to lose Randi as a colleague, but I will be ready to work with Kathie, if it gets to that."

Leffingwell and Mayor Pro Tem Mike Mar­tinez had similar thoughts about the potential City Council dynamic going forward. "There's no question that Tovo was [Council Member] Laura Morrison's protégé, her appointee to the Planning Commission – they're very close," said Leffingwell. "But ... she certainly has a mind of her own. I look forward to talking to her; I look forward to sitting down with her. ... I plan to do that in the very near future." Martinez was similarly optimistic: "This polarization between people who are supposedly 'pro-developer' and those who are 'pro-environmentalist' is nothing new in Austin politics. This is still a great city, and this is not going to change that. We'll just see people [on council] who, on specific issues, will support different outcomes. ... I think Kathie, if she gets elected, I think she realizes she has to represent the entire community and not just one segment of it."

Also in the crowd were less prominent Shade voters, such as Leslie Luciano, director of advocacy for Bicycle Sport Shop and a board member of the League of Bicycling Voters, which endorsed Shade. She said she'd originally expected to be endorsing Tovo on general "environmental" grounds. "I got to know Randi and found that she is really willing to listen," Luciano said, "and to change her mind with new information." She said that seemed not to be the case with Tovo, who instead "tended to respond with planning commission principles instead of specific answers. We need somebody who is willing to listen." Hearing the discouraging early voting numbers, Luciano said she had hoped for better but was not surprised. "She was really hurt by her WTP4 vote and then the emails," Luciano said. "If this campaign had gone on another month, I think Randi could have pulled it out.

One perhaps unlikely El Arroyo attendee was Luke Sheffield, who worked on Shade's run-off ground team and became something of an issue himself in the final weeks because he has worked primarily for Republican candidates (like GOP pollster Mike Baselice, also on Shade's team). Sheffield shrugged at the criticism, saying: "We hit the precincts hard; we tried to define the debate: We portrayed Randi as the balanced, reasoned choice. ... I think she's a terrific person, I love her to death, and we did our best." As for the attacks on him, he said: "I'm not an 'evil Republic­an.' I'm a regular guy, a father of an 18-month-old little girl. ... I believe the government should be run for the people, limited government; I believe in individual rights and that less government is probably what's most efficient for everybody. If that makes me a bad person, so be it." Asked earlier about the GOP hires, Shade said, "I have way more Democrats on my campaign staff, but Republicans are a part of this community, too."

Following her concession speech, a reporter asked Shade what was next for her ("A cold El Arroyo margarita") and if she had any advice for her successor. "It's a very challenging job," she said, "and it goes by very, very fast. ... This has been a very contentious election, and I hope we can get over that and go forward." 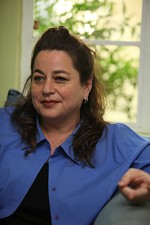 'An Independent Person'
A Conversation With Randi Shade 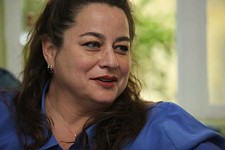