The controversy that won't die 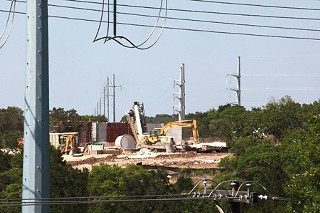 Despite her opposition to City Council's 2009 approval of Water Treatment Plant No. 4, Place 3 candidate Kathie Tovo says now that construction has begun, she would "protect the taxpayers' investment." If council were to reconsider the project, she has said, she would "evaluate all information and seek to understand the full economic and legal implications before casting any vote."

This response has left too much gray area for some, including Place 3 incumbent Randi Shade, who was a "yes" vote in 2009. Shade released a TV ad last week asserting – against a backdrop of footage from the April 17 Oak Hill wildfire – that "water is needed for drinking, living, fighting fires" and that Tovo's opposition to WTP4 puts "our future water supply at risk."

"As someone who was literally in the middle of the fire path," responded Oak Hill resident Paul Robbins, "I am indignant." He points out that on the day firefighters battled the blaze, Austin Water used only 161 million gallons of water, well below AW's treatment capacity of 285 million gallons per day and storage capacity of 167 MGD.

Save Our Springs Alliance Executive Director Bill Bunch also slammed the ad, noting that broken and undersized pipes and pump stations without "reliable back-up power supply" have all been responsible for interruptions in water service, but "Austin homes and businesses have never been without water due to a shortage of treatment capacity."

Nonetheless, AW notes that power supply issues and other maintenance problems are hard to fix at the Davis water treatment plant because of its outdated design. According to Jane Burazer, AW's assistant director of treatment, repairs often require that Davis be shut down. Because the other city plant, Ullrich, can only handle the extra load for so long, those "windows of opportunity" are limited to periods of 24 to 48 hours. Regardless, Bunch argues that Austin has plenty of treatment and storage capacity for the time being, pointing out that before AW decommissioned the Green WTP in late 2008 (losing 42 MGD), AW added 67 MGD to Ullrich in 2007, bringing total treatment capacity to 285 MGD; meanwhile, he notes, Austin's baseline water use (or winter use, as in, no lawn-watering) is only 100 to 110 MGD.

Regarding replacement and repair of outdated pipes, Robbins criticizes AW for underspending its allocated budget. While AW Assistant Director Daryl Slusher says AW has been able to "do more with less," Robbins asks, with so much work left to be done, why not fold that extra money back into the program? "You have a certain capacity to be able to plan and schedule and do work," says George Calhoun, assistant director of pipeline operations. "And when you fund it to a level that you can't meet that capacity, then you're encumbering that money where it can be spent somewhere else." Asked if the leftover money has been spent on other conservation programs, Slusher said it more likely went into AW's savings to meet revenue shortfalls.

When the utility mentions revenue shortfalls, of course, critics point to WTP4 as an obvious place to cut back. But AW officials insist there are reasons not to delay construction. Davis and Ullrich have little room for expansion, says AW (an assertion Bunch disputes), and WTP4 will draw from Lake Travis, a cleaner ("exceptional" by Environmental Protection Agency standards) and deeper source of water than Lake Austin, where Davis and Ullrich are located. WTP4 will also provide treated water to the growing population of the north/northwest section of the city's Desired Development Zone (where the Domain is located), while using half as much energy.

Robbins believes AW overestimates those energy savings (for his analysis, see his report), and Bunch says Lake Travis' depth actually causes more algae growth, offsetting any benefits from its "exceptional" cleanliness. He also claims that the north/northwest area of the city currently has an overabundance of water supplied by the Martin Hill Reservoir, an assessment Burazer disputes as misleading, noting that "reservoirs aren't designed to provide for capacity" but rather act more as a "buffer" for changes in demand.

Finally, there's the cost issue: AW says WTP4's rate impact is not only low but also irrelevant when it comes to finding ways to fund conservation and other system improvements. But Bunch points out that WTP4's costs are on the rise: A recent report putting the cost at $503 million (below earlier estimates of $508 million) quietly dropped the $15.9 million Forest Ridge transmission main and its associated costs originally included in that $508 million estimate. Meanwhile, he points out, the cost of many other line items, including the Jollyville transmission main, have grown.

According to AW spokesperson Kevin Buchman, the Forest Ridge line "was removed from the initial phase [of construction] in order to keep the project within budget." The rate impact of the first phase "remains the same or slightly less," he says, noting that the delay won't affect "successful completion and operability of the plant." When anticipated bids for the Jollyville transmission main are opened later this month, says Buchman, AW will have a better picture of "overall project costs," which "could be lower or higher than anticipated, and therefore determine any cost savings or additional cost control measures."