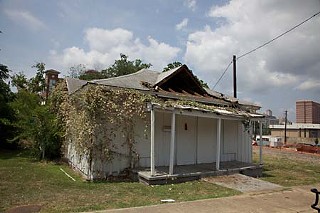 Central East Austin neighborhood residents are decrying the city's recent demolition of an older home at 905 Juniper, the first of four homes slated for the wrecking ball to make way for affordable housing developments in this once-thriving African-American enclave. The city's efforts to revitalize the East 11th and 12th street corridors has brought some success stories, but a sticking point for residents is the program's spotty record on rehabilitating its inventory of homes, many built a century ago, which were acquired in the early Nineties with federal dollars. Several homes have been lost to fire or demolition by neglect; urban renewal has never been the city's strong suit.

With the tri-party agreement ended between the city, the Urban Renewal Agency, and the Austin Revitaliz­a­tion Authority – the latter group charged with rehabilitating the structures – the remaining projects on ARA's to-do list transferred to the city's housing operations. After assessing the boarded-up and battered homes, housing officials determined that a rehab effort would be cost-prohibitive. Rather than allowing the structures to continue to languish, the city wants to tear them down to build new homes to sell to eligible home-owners. "Our goal is to build smaller homes that have similar characteristics to the older structures," said Gina Copic, real estate development manager with the Neighborhood Housing and Community Development Department.

Residents who have witnessed the slow deterioration of the city's real estate holdings in the neighborhood question why the city is choosing to bulldoze the homes instead of rehabilitating them or offering them up for others to relocate at their own expense. Copic says the homes are in such disrepair, with floors missing and chunks of roofs wiped out, that there is little left to salvage, and the funding isn't there to finance what would be a huge undertaking. And the homes likely wouldn't survive a move, she said. 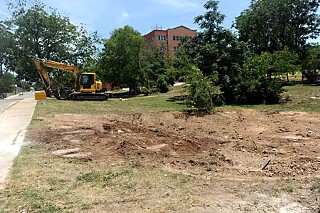 The city moved swiftly to knock down the home and clear out the debris, leaving an empty lot. (Photo by John Anderson)

Nevertheless, neighborhood leaders have vowed to try to salvage the tiny houses that were once home to Austin's earliest African-American residents. "The small size, frame construction, and prominent front porch typify the defining features of housing for working-class families at the turn of the century," said Stanton Strickland, president of the Robertson Hill Neighborhood Association and the new president of the Organization of Central East Austin Neighborhoods. While the battered structures lack the architectural significance to gain historical designation, they're about all that remains of first-generation freed slaves who worked as porters, waiters, maids, and cooks, according to city records.

As neighborhood residents tell it, the city dragged its feet for more than two decades in the Robertson Hill neighborhood, then moved with uncharacteristic swiftness to obtain a demolition permit on the home at 905 Juniper. A heavy equipment operator arrived, steered the bulldozer toward the aged structure, and commenced to nudge the house into submission. The walls bowed inward and collapsed into a pile of splinters. Only the home's front gable was deemed architecturally significant enough to salvage for preservation.

"Structurally the house was so unstable, it was bowing at the bottom; there was no floor," said Copic. "With these old single-walled houses – the walls are literally what holds it together. The boards [at 905 Juniper] were all rotted around the bottom, so moving it would have collapsed it inward. We thought we could try to salvage something of the wood, but it was so brittle and so unstable it just immediately collapsed onto itself."

Next on the demolition list are homes at 905 and 909 Olive Street, as well as 1164 Curve Street (formerly of 1009 Juniper). Another home, at 907 Olive, will be restored. (See a city-provided map with photo insets of the homes with this story here.) Also, federal stimulus funds and 2006 bond money will help preserve the Dedrick-Hamilton house at 912 E. 11th; it will become the African Ameri­can Cultural and Heritage Facility, with groundbreaking set for 9:30am Friday.

While the empty homes have changed hands many times – from city-sanctioned nonprofit corporations to city departments and housing agencies – the city is ultimately responsible for its own failings on the restoration of the homes, says Eric Stanridge, an architect who moved to a home on Juniper Street about seven years ago. This isn't to say the revitalization effort hasn't paid off: The program has had several successes, as evidenced by neat rows of colorful houses along Juniper. But it's the ailing, vacant homes and empty lots that tend to dominate the landscape, as well as the ongoing debate between neighbors and city officials. "I'm tired of living around empty lots," says Stanridge.