So Many Elections, So Little Time

Senate bill could have unintended consequences for local elections 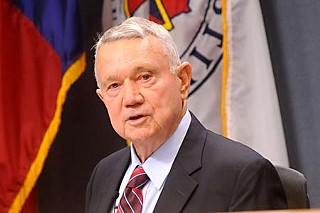 Mayor Lee Leffingwell, who intends to seek re-election next year, favors moving City Council elections from May to November. (Photo by John Anderson)

And now for some completely different election news: A seemingly innocuous Texas Senate bill, passed and awaiting the governor's signature, may drastically affect Austin's local elections, even extending the terms of the mayor and three City Council members by six months.

Senate Bill 100, legislation from San Antonio Dem Leticia Van de Putte, was drafted to bring the state in line with federal law requiring that federal ballots be delivered to military and overseas voters at least 45 days before an election. It preserves Texas' current March primary date, while postponing potential primary run-offs to the fourth Tuesday in May, so as to meet the 45-day requirement.

But the measure could be difficult to enact for those Texas cities, Austin included, that hold city council elections in May. Many doubt the Travis County Clerk's Office has the budget and resources to stage a federal party primary, a run-off, and a city election within such a tight a time period – as could happen in 2012's mayoral election. The Texas Municipal League warns about SB 100's consequences on its website: "A county elections administrator who finds the task of reprogramming and calibrating electronic voting machines in the spring of even-numbered years too onerous may refuse to provide machines or otherwise assist with the city election on that date. Realistically, this means that many cities may still have to move their elections to the November date under the amended version of S.B. 100."

"It would seem that we're not going to have an election in May 2012," Mayor Lee Leffingwell told the Chronicle, noting he's spoken with Travis County Clerk Dana DeBeauvoir on the possibility of preserving a May election, "and she said she can't do it."

So what does that mean for the next general council election? Leffingwell says he plans to run for re-election in 2012, and Places 2, 5, and 6 – held by Mike Martinez, Bill Spelman, and Sheryl Cole, respectively – are also up for grabs that year. The mayor is proposing that, should SB 100 come to pass, those terms be extended and put up for a vote in November 2012. "It's my understanding the law that does this also authorizes city councils to extend council members' terms to the next election date," Leffingwell said.

For more on the matter, see "City Hall Hustle."