With Travis split so many ways, it may not get representation at all 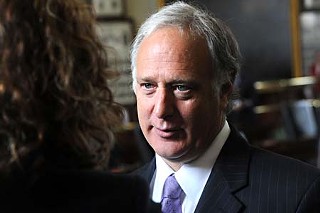 Really, what Tom DeLay needed back in 2003 was more districts.

Eight years ago, the former U.S. House majority leader and now convicted felon tried hard to stick it to liberal Austin – and especially its Congressman Lloyd Doggett – when he persuaded the state Legislature to engage in an unprecedented mid-decade redistricting. But DeLay couldn't quite pull it off. He did chop up Travis County three ways – putting most of us under Republican representation – but Doggett stayed in office.

This time, armed with four new districts – and thus more ways to chop and slice – Republicans are poised to make DeLay's dreams come true. On Monday, the state Senate passed a redistricting plan that will carve up Travis five ways, and with the GOP holding a 101-seat super-majority in the House, there's probably nothing Democrats can do to stop it – not in the Lege, anyway.

And here's the really scary part: It's entirely possible that the capital city of Texas could end up with not one of its residents serving in Congress. That's because none of the five districts has a majority of its population in Travis County. Under the plan as currently configured, Travis County does best in District 10, with 35% of the population; from there, it just gets worse, down to 19% for District 17.

Travis County citizens and elected officials alike pleaded last week to the House and Senate redistricting committees to keep Travis as whole as possible, since the county easily has enough population to have one district completely within county borders. But with the GOP in control, the pleas fell on willfully deaf ears.

Complaining that Travis was only being used to fill out population requirements of other districts rather than serving as the anchor for one of its own, Austin Sen. Kirk Watson told the Senate committee, "Travis County citizens ... shouldn't be the salvage yard of a congressional redistricting map where you go looking for alternative parts to make other districts work."

Watson called the map a "systematic effort to silence voices of the people that are living in Travis County." He also said it tramples on minority voters in Travis, splitting up coalitions formed in East Austin that have allowed minorities to successfully elect candidates of their choice (an ability protected by the Voting Rights Act).

Asked why Travis got cut up the way it did, Sen. Kel Seli­ger, R-Amarillo, replied to the committee that it was simply a matter of finding equal population for 36 districts while still complying with the Voting Rights Act. That's baloney, of course. Two redistricting reform activists, A.J. Pate of Houston and Bill Owens of San Antonio, produced maps that leave Austin almost completely whole while still coming up with at least as many "minority opportunity districts" as Seliger's map. Owens complained to the committee that Seliger's map is a "blatant Republican gerrymander."

"This outrageous scheme would do immeasurable harm to our community and the values that set it apart as such a unique place in which to work and live," said Doggett, the map's target. "I believe the crooked lines of this map will be rejected [by the courts] as a blatant violation of the Voting Rights Act."

On a statewide level, minority advocacy groups, such as the Mexican American Legal Defense and Education Fund and the League of United Latin American Citizens, complained that the plan fails to significantly increase the number of Hispanic opportunity districts, if at all. That's despite the fact that nearly 90% of Texas' population growth over the past decade was among racial minorities, and most of that was Latino. Like Doggett, they predicted the map wouldn't pass the Voting Rights Act test in court, which protects minority opportunity districts.

In the House committee, Joey Cardenas of LULAC said he was against the map and told Republicans, "I don't blame y'all for hiding [the map] until Tuesday," just two days before the committee hearing. "This is how we do redistricting in Texas. We make an attempt, we fail at that attempt, and we go to court."

In the Senate committee, Sen. Mario Gallegos marveled that despite the Hispanic growth, "The proposed plan ... would actually allow Anglo voters to control three additional districts." He claimed that this was achieved by packing many Hispanics into a few districts, while dividing up the rest of the Latino population into ineffective minorities of other districts. Speaking on the latter, he quoted an anonymous Latino activist as saying, "We are tired in Dallas of being everyone's 30 percent bitch."

The map, with only minor amendments, passed the Senate 18-12 and has been referred to the House committee.