Not So Sine Die: What's Special About More of the Same?

The Legislature doesn't quite end 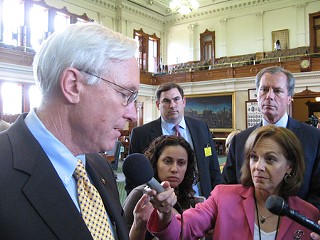 Sen. Steve Ogden tells reporters the Lege is in for a "long special session." (Photo by Richard Whittaker)

From the sounds of music emanating from legislators' offices and the parties around Downtown, a casual observer might have thought the 82nd Legislature had ended. Yet as lawmakers, lobbyists, and staffers celebrated sine die on Monday, May 30, they all knew they would be back in the Capitol at 8am the next day. For the ninth time in his 12 years as governor, Rick Perry has called a special session.

Perry blamed it on Sunday's failure of the school finance reforms – in theory, a rewriting of the entire allocation system – in Senate Bill 1811. In fact, the seeds had been sown much earlier; neither the House nor Senate Public Education committees sent a school finance measure to their respective chambers as a regular bill. Instead, they took their rival proposals and bolted them onto an unrelated fiscal matters measure. With a lack of consensus for a long-term fix, the SB 1811 conference committee Frankensteined the two proposals together, cutting every district's funding by 6% in the first year and then changing the funding formulas in the second year. The resulting bill – a 200-page document no one had seen before – was then dumped on members in both chambers on May 29, with fewer than 14 hours before the midnight voting deadline. If the plan was to force the bill through a quick Memorial Day weekend vote, that plan failed. The House passed it 84-63, with an unlikely alliance of Democrats, moderate Republic­ans, and tea partiers voting no. The Senate never took a vote before the midnight deadline, killing the bill.

While the GOP blames SB 1811's failure on the last-hour filibuster by Sen. Wendy Davis, D-Fort Worth, the reality is that the leadership mismanaged the calendar. Several other priority budget measures, such as the health care provider payment revisions in SB 23 and a $900 million allotment for new instructional materials in House Bill 6, had similarly died without a final vote. Before SB 1811 failed, Perry had already warned he would call members back on two issues: Texas Windstorm Insurance Assoc­i­a­tion reform, which would take public Perry's long-running feud with Democratic donor and attorney for Gulf Coast businesses Steve Mostyn, and congressional redistricting, which would avoid the embarrassment of having Republican U.S. Rep. Joe Barton's redistricting suit against the state (for not doing its assigned task) hit the courts during the presidential primaries. Indeed, that call looked likely enough that Senate Redistricting Committee Chair Kel Seliger, R-Amarillo, filed new congressional maps with the Legislative Council. When Perry issued the call late on May 30, it included Medicaid and education funding only; within a day, he had added congressional redistricting and has left the door open to add more issues either in this special session or another one later in the year.

Democrats still hope external pressure from public school advocates will force the GOP to tap the $6 billion Rainy Day Fund for schools. Their challenge is to reshape the budget debate in almost record time, and now that school districts and pressure groups have seen what SB 1811 contains, that cause may have developed some powerful allies. The Dems' other targets are Republican primary voters; throughout the session, GOP lawmakers have argued that voters told them to make government "live within its means," which this cuts-only budget does. Democrats counter that the broader message is about government transparency. As Austin Rep. Mark Strama warned Repub­licans during the SB 1811 debate, "We have deferrals, we have speedups .... This bill is full of the kind of accounting tricks and chicanery that your voters said they were sick of."

The GOP enters the special session feeling bullish, as Lt. Gov. David Dewhurst said he will run the Senate on a simple majority basis, crippling the Democrats' ability to use the two-thirds rule to block bad legislation. However, the GOP felt similarly bullish about their 19-12 Senate majority and 101-seat House supermajority in the regular session – which ended in turmoil. In addition, education spending also has a tendency to get away from legislators; in 2005, it took three special sessions to pass a school finance reform package.

Perry may still add windstorm insurance to the call. He might also throw "sanctuary cities" into the mix, and, in what could be a fit of vindictiveness against the upper chamber, Perry warned that he might veto the current Senate redistricting map. Outgoing Senate President Pro Tem Steve Ogden said, "My prediction is this will be a long special session."

However, just because Perry adds items to the call does not mean that the Lege enacts them. In 2009, the governor handed four items to the sole special session of the 81st Lege. They took up only two, and Perry quietly backed down on the other two rather than force the issue (see "Special Session: In and Out in a Jiffy," July 10, 2009). After a session of divisive race-baiting on immigration and voter ID, as well as "emergency" assaults on women's rights and health care, adding more explosive topics will only re-emphasize the question plaguing Perry's burgeoning presidential aspirations. Democratic House Leader Jessica Farrar, D-Houston, put it bluntly: "Does the rest of the nation really want this bully?"