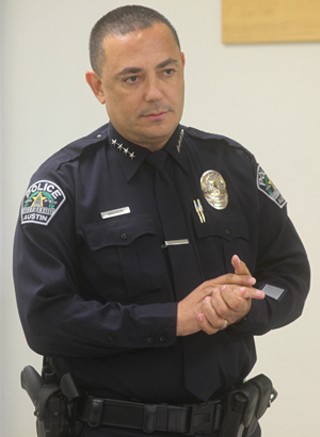 The U.S. Department of Justice has officially ended its inquiry into the use-of-force practices of the Austin Police Department, which it began in 2007, concluding that it found "no reasonable cause to believe that APD has engaged in a pattern or practice that violated the Constitution or laws of the United States," according to a May 27 letter from the department to the city's legal department.

An inquiry into APD's practices was requested in 2004 by Nelson Linder of the Austin NAACP and Jim Harrington with the Texas Civil Rights Project, based on accusations of excessive use of force by police against minority residents, including the high-profile shooting deaths of Sophia King in 2002 and Jesse Lee Owens in 2003. The groups updated their complaint in 2005 to include the circumstances of the Midtown Live nightclub fire, which sparked APD's infamous "burn baby burn" fiasco. Then-Chief Stan Knee and then-City Manager Toby Futrell signed on to the request, saying the city welcomed the review. The DOJ told officials it would undertake the review in 2007. The announcement was made one day after the shooting death of Kevin Brown by APD Sgt. Michael Olsen; that incident was quickly added to the inquiry.

The DOJ in late 2008 made 160 recommendations to improve the department's policies and procedures, most of which have been implemented by APD – including changes to the use-of-force policy, changes in the way officers report uses of force, and changes to the department's intake, classification, and handling of citizen complaints about officers, which the DOJ called "needlessly complex and fraught with opportunities to apply subjective judgment."

In closing its inquiry, the DOJ's Jonathan Smith, chief of the Special Litigation Section, notes in a letter that "gaps in use-of-force reports and supervisory investigations, though not necessarily rising to the level of constitutional violations, should be reformed." (See the letter here.) First, the DOJ recommends that the APD "bring to fruition its planned, though not fully implemented" early intervention system, which is meant to identify officers who "demonstrate a tendency to violate APD." That system should be reassessed, Smith writes, to ensure that potential problem officers are flagged for "personnel action" such as training, counseling, or internal investigation. Second, Internal Affairs should be sure to "conduct investigations in an objective and probing manner," in keeping with the recommendations the DOJ made in 2008. Third, the department's use-of-force review process should "identify potential tactical or training issues" that could be "corrected to minimize uses of force." Finally, the DOJ recommends that the city's Office of the Police Monitor (about which the DOJ also made a host of recommendations in 2008) should provide "objective, public reports on the conduct of APD's internal affairs." While the police monitor's office has previously produced purely statistical reports – the number of complaints made to the office, for example – the DOJ recommends that APD "utilize OPM to produce timely reports not just on the number of internal affairs complaints ... but also to provide a qualitative analysis of the internal affairs system."

In a written statement, Harrington praised the process and encouraged APD to take seriously the DOJ's remaining recommendations. "Because of DOJ's investigation, APD has changed course, and APD now has a better and more professional police department," he wrote. "Credit belongs to DOJ's staff and to [Chief Art Acevedo] ... and his staff, who took advantage of the situation to work with DOJ to greatly improve APD's operation. APD's cooperation certainly is the reason that DOJ felt that it could now close its investigation and not take legal action against the department."

Indeed, the DOJ has been ramping up its official inquiries into police practices; it recently announced so-called "pattern-and-practice" inquiries into departments in several major cities – including Newark, N.J.; Seattle, Wash.; and Denver, on top of its aggressive inquiry into the New Orleans Police Department, where several officers are now facing criminal prosecution.