In December, Chief Art Acevedo displayed SWAT Officer Michael Hamilton's wrecked Crown Victoria outside the Eastside SWAT HQ as a warning not to drink and drive. (Photo by Jana Birchum)

Austin Police Department Chief Art Acevedo on May 19 fired former SWAT officer Michael Hamilton and suspended six other officers in connection with a Dec. 2, 2010, one-car crash that destroyed $40,000 worth of city property.

On the night of the crash, Hamilton and five other members of the SWAT team, all of whom were on call for the department and driving city-owned take-home vehicles, had attended a football-watching party at the home of fellow Officer Eric Fitzgerald, in violation of department policies regarding drinking and operating city vehicles while on call. Hamilton and one of the officers, Will Mercado, had also gone drinking at restaurant/bar Twin Peaks earlier; Hamilton left the party around midnight even though Fitzgerald had offered him a place to stay for the night. No one tried to stop Hamilton from driving (nor did any of the other officers stay the night or seek a sober ride home); while driving on Convict Hill Road, Hamilton lost control of his car and crashed.

Officers who responded to the scene smelled alcohol on Hamilton, but when they asked him if he had been drinking, Hamilton "repeatedly lied and said 'no,'" Acevedo wrote in a disciplinary memo. Hamilton also refused to take a field sobriety test; more than three hours later, after officers secured a warrant to take and test his blood, Hamilton's blood-alcohol content was nearly twice the legal limit.

Mercado, who also drove home in a city-owned vehicle after drinking – and who should have recognized that Hamilton was drunk, Acevedo pointed out in a memo – was handed a 15-day suspension; Fitzgerald, who hosted the party and failed to stop Hamilton from driving home (and did not call 911 to report Hamilton's drunken driving after the officer drove off), was given a five-day suspension, as were Officers James Harvel and Alejandro Torres. Harvel and Torres, who were on call for the SWAT team that night while drinking, failed to notify supervisors that they were drinking and should be taken "off-call," and drove home in city-owned cars. SWAT team Officer Bryan Bowen got a 10-day suspension, while Officer Jon Ippolito was given four days' for driving home from the party, after drinking, in a car that had been given to him for use in connection with his duties with the APD's gang unit. 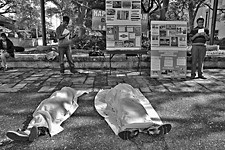