• Council Member Randi Shade and challenger Kathie Tovo will face off in a June 18 run-off, with early voting June 6-14, after Tovo surprised everyone by taking a nearly 14-point lead on the incumbent in the general election. Two other incumbents won re-election handily. See "All the Votes That Fit." Meanwhile, City Council will not meet this week; its members return to the dais May 26.

• One of Austin's most accomplished conservationists, Kent Butler, died May 13 while hiking in Yosemite National Park. Butler, associate dean of research and operations at the UT School of Architecture, helped create the Barton Springs/Edwards Aquifer Conservation District and the Balcones Canyonlands Conservation Plan. He appeared before City Council in 2009 to testify against Water Treat­ment Plant No. 4; to see his testimony, visit the photo/video gallery at www.sosalliance.org. A memorial service will be held at 4:30pm Thursday, May 26, at the UT Alumni Center. 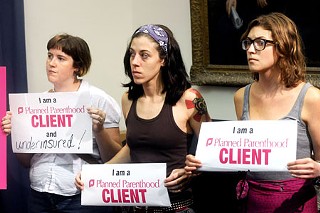 These Planned Parenthood clients and thousands of other women across Texas will be denied adequate health care services if lawmakers insist on cutting the group from the Medicaid Women’s Health Program. See “Not Everyone Hates Women’s Health Care.” (Photo by John Anderson)

• Texas Comptroller Susan Combs has some good news: She has revised her revenue estimate upward by $1.2 billion, leaving the state only $26 billion short of what it needs to cover current spending levels. Of that new revenue, $300 million goes to the Rainy Day Fund, which lawmakers still refuse to tap to cover that shortfall.

• With House Bill 1 – the state budget – locked away in conference committee, lawmakers should be working to get Senate Bill 1811 – the fiscal matters bill – passed because of the additional $4 billion it releases for the next two years. Instead, SB 1811 (in House debate at press time) is being loaded with extraneous amendments as legislators try to tack on everything from school vouchers to smoking bans before the end of the session May 30.

• Redistricting wars continue: The Senate has adopted a map slicing Travis County into four Senate districts; they put Austin-Bergstrom International Airport back into Sen. Kirk Watson's district, but parts of the city will now be represented by Laredo Dem­ocrat Judith Zaffirini. Meanwhile, Rep. Harold Dutton, D-Houston, may force the House map to be redrawn after the Department of Justice ruled that prisoners in New York should be counted in their hometowns, not where they're incarcerated. In Texas, the ruling could mean an extra seat for Houston; see "One County, Four Senators?"

• Anyone else smell Astroturf? Political blog RealClearPolitics.com is reporting that associates of Gov. Rick Perry are quietly testing the waters for a presidential run in hopes that a "draft Rick" movement will materialize. Perry has repeatedly denied presidential aspirations.