Davis vs. Rodriguez: Who Do You Trust? 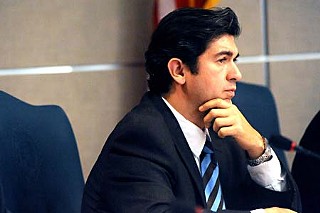 State Rep. Eddie Rodriguez's long-standing goal of providing tax breaks to help ease gentrification concerns in East Austin could finally inch closer to reality this session, but his plan still has one major opponent: Travis County Precinct 1 Commissioner Ron Davis, who represents many of the people that the bill would supposedly help. And Davis' opposition has many people scratching their heads.

Rodriguez first got the ball rolling on the issue in 2005 with a bill to create a "homestead preservation district" in East Austin, which would give Travis County and the city of Austin three tools to create affordable housing: a tax increment financing zone, a land bank, and a land trust. It's the latter that has Davis upset.

The land trust would create a joint nonprofit between the city and county that would assume ownership of vacant properties with delinquent tax payments, build affordable housing, and then sell the houses (but not the land) to low-income families. That way, the homeowners would pay property taxes only on their houses, not the land – which should result in big savings, because the land often represents the biggest portion of the property tax bill.

The city approved the land trust back in 2007, but the county wanted some tweaks that Rodriguez is trying to deliver in the form of House Bill 990, which has passed the House and is in Senate committee. As originally reported by online local politics newsletter In Fact Daily, what was supposed to be just a staff update on legislative issues at the April 26 commissioners court meeting became a Davis rant against the proposal.

"My concern is that this particular bill," said Davis, "has come up under the guise of providing property tax relief for longtime taxpaying residents of East Austin who are predominantly black. This bill appears to facilitate a land grab by the city of Austin Com­mun­ity Development Corporation, which is the facilitator of gentrification." He said he also opposes the bill because it contains a "shall" provision, supposedly obligating the county to participate in the trust.

County staff and other commissioners told Davis that the county is not obliged to participate, but Davis remained unconvinced. His insistence that it would, and his "land grab" characterization, drew a sharp rebuke from Precinct 2 Commissioner Sarah Eckhardt.

"We can differ on whether it is a wise policy move," Eckhardt said, "but the fact remains it is discretionary and we are at our option to refuse this policy option if we do not believe it is wise or it would be abused, and I can understand that, but I will not allow a misrepresentation to stand that this bill forces us into anything or that Rep. Rodrig­uez is engaged in a plot to steal property from East Austin residents."

As noted, the bill under current consideration merely tweaks the existing law, which passed six years ago – in fact, HB 990 addresses other aspects of the law, not the land trust. The trust could already be in existence if not for the county holding out for changes.

Davis said he has repeatedly heard from constituents opposing the land trust and from no one who supports it. He also said analysis by his staff has shown the county would be harmed by removing land from the tax rolls. Rodriguez countered that his plan would actually bring property onto the rolls by building houses on delinquent properties that weren't bringing in money anyway.

Ultimately, Davis' opposition may not matter, since a majority of the court appears to support the plan. Nonetheless, Rodriguez sounds exasperated by Davis. "I tried to explain it to Mr. Davis," Rodriguez told the Chronicle from the House floor. "He either categorically does not like land trusts, or he has a misunderstanding of them. He doesn't see my point on the matter, and I don't see his point. As far as a land grab goes, to me it's a bit insulting. I've been working on affordable housing legislation for a long time, even before I was a legislator. ... I cannot seem to change his mind on the matter, and I'm just moving forward with it because it's something I believe in. He'll just have to be misinformed on the matter."

But Davis said his constituents' opposition puts the ball in Rodriguez's court. "He's the author of the bill. ... He needs to educate some folks on what he's trying to do." At press time Wednesday morning, the Senate Economic Development Committee was taking testimony on HB 990.