Won't Take Nuke for an Answer

The nuclear power boys are weaseling again, this time in Vermont.

Entergy Corp., an electric utility giant based in New Orleans, owns the Vermont Yankee nuclear power plant, which is nearing the end of its 40-year license to operate. No problem, here's a 20-year extension of your license, said the federal Nuclear Regulatory Commission (a notorious industry lapdog). But wait, said Vermont officials, Entergy signed an agreement with us to seek state approval for continuing to operate the 40-year old reactor – and our legislature has decided, in a word, "no."

So the corporation has gone running to federal court to weasel out of its state agreement, arguing that federal authority takes precedent over local on nuclear matters. Entergy insists that decisions made by Vermont's legislature are "political," whereas the NRC decision to extend the license is made by "experts." Besides, says an Entergy executive, Vermont Yankee has gotten good safety and performance ratings from an industry group. So, trust us.

An industry group? Isn't that like saying your mother thinks you're doing a good job? Curiously, Entergy refuses to release the industry report. Trust us, it says again.

Uh ... no. The Vermont Yankee nuke plant is the same vintage and make as the reactors at Japan's Fukushima Daiichi plant, and it has recently had embarrassing operational issues. For example, corporate officials testified to legislators in 2009 that radioactive tritium could not leak into soil and water because the facility had no buried pipes. Trust us, they reiterated. But only a few months later, a tritium leak from an underground pipe was discovered.

Trust us? Not on your life – much less on our lives! That's why decisions on nuclear power must be political. The people – not "experts" – must rule.

Republican congresssional leaders don't seem to be the quickest bunnies in the litter.

Having taken their blunt budget axe to Medicare, Medicaid, Head Start, the Environmental Protection Agency, National Public Radio, and dozens of other popular and effective programs, they then scampered to save one of the least popular and least effective federal programs on the books: the annual taxpayer subsidy for Big Oil.

As gasoline prices were rising to $4 a gallon and higher, the House GOP voted unanimously to let the oil giants continue siphoning $4 billion a year out of our public treasury. All 241 of the Republican/tea party House members – with not even one dissenter in the bunch – declared that in this time of a supposed budget "crisis," the neediest among us are not the elderly and the poor but the little waifs of Big Oil.

Meanwhile, Exxon Mobil Corp. just announced a 69% leap in profits this year, while Chevron, ConocoPhillips, and others are enjoying similar jumps in theirs. Guess what percentage of those enormous profits the corporations are likely to pay in taxes. Zilch. Their lobbyists have punched such gaping loopholes in our tax code that they can escape paying anything for the privileges and benefits they get from America. ExxonMobil, for one oily example, had a $19 billion profit in 2009. But not only did it pay exactly zero in federal income taxes, it manipulated the system to get a $156 million rebate from us. Likewise, Chevron and ConocoPhillips had multibillion-dollar profits that year, paid not a dime in taxes, and also got refunds.

Republican lawmakers had a clear choice in dealing with the deficit. So why did they choose to cut off your granny's health care, while helping these corporate billionaires make off like bandits? I guess it's a matter of whom you really love. 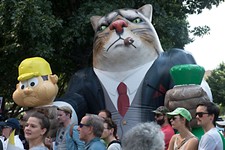 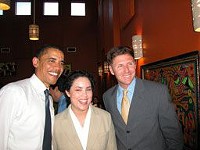