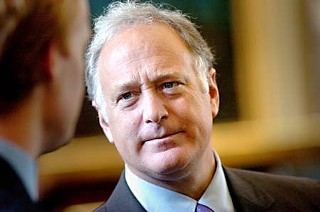 Austin Sen. Kirk Watson objected to an SBOE map that would continue to divide Travis County into two districts. (Photo by John Anderson)

While Congressman Lloyd Doggett was ringing alarm bells over congressional maps that may exist (see "Latest Map 'Looks Like a Whirlpool'"), the Texas House and Senate last week approved ones that definitely exist. The House voted in favor of new boundaries for itself, mostly favoring the GOP, while the Senate passed a committee substitute for the State Board of Education districts that now must be reconciled with an earlier House version.

Locally, there doesn't seem to be a reason for Austinites to worry about the House map – the only major change in Travis County was to make Democrat Donna Howard's District 48 more urban and Repub­lican Paul Workman's District 47 more rural, something that will likely please the incumbents and residents alike. Also, the Eastside Memorial High School (formerly Johnston High) neighborhood was switched from Dawnna Dukes' District 46 to Eddie Rodriguez's Dis­trict 51, a swap both reps wanted, though it got temporarily tripped up in committee. And to the north, an odd proposal to connect Milam and Burnet counties via a very narrow (and suburban) strip of southern Williamson County were rejected in favor of linking them through a wider, more rural swath of northern Williamson.

The SBOE map was a different matter – it continues to divide Travis County into two different districts. Austin Sen. Kirk Watson objected, noting the map not only divides the city and county but also one of the largest school districts in the state (Austin ISD). In a letter to his colleagues, he pointed out that Travis County is easily populous enough to anchor a complete SBOE district without dividing the county. "Instead, the proposed map cuts the county in two parts for no apparent reason," he wrote. (The division dilutes the liberal Austin vote and guarantees we'll continue to be represented by conservative Republicans, including far-right SBOE member Ken Mercer.)

While the House map caused no tremors locally, it caused consternation statewide for minorities, Democrats, and even some Republicans (the map passed 92-52, even though the GOP has a 101-seat majority). Harris County's delegation was reduced from 25 members to 24, which brought complaints that the GOP map drawers weren't looking hard enough for minority opportunity districts and thus may be running afoul of the Voting Rights Act, but Redistricting Committee Chair Burt Solomons said the reduction matched population numbers; while Harris County grew over the past decade, its growth lagged behind that of suburban Houston.

And Valley legislators were angered over extreme redrawing to protect Edinburg Rep. Aaron Peña, who after re-election as a Democrat switched parties before the session started. Rep. Veroni­ca Gonzales of McAllen said her new district would leave her with about 1% of her current constituency. "It is not a pretty picture," she said. "It is a completely different district from the one I represent."

On Friday, Rep. Garnet Coleman, D-Houston, fired off a letter to the U.S. Justice Department detailing various objections to the map. (See austinchronicle.com/newsdesk for the full text.) Meanwhile, Rep. Dan Flynn, R-Canton, complained that the map doesn't do enough to maintain the 101-seat GOP majority. "At a time when it is important to grow our Republican majority, especially among conservatives, placing conservatives in contests against each other is not the right course." Flynn apparently doesn't understand basic math: 89% of Texas' population growth since 2000 was non-Anglo. Unless blacks and Hispanics suddenly start voting Republican en masse, that 101 will be the GOP's high-water mark.