Pride Goeth to the Fall

When it comes to the Austin gay community, there is Pride and then there is pride.

The Austin Gay and Lesbian Pride Foun­da­tion recently announced that it is rescheduling its celebrations from the traditional June date to Sept. 10. Now the foundation's board is trying to explain why it has unilaterally decided to move the biggest event on the local LGBTQ calendar with so little warning and even less public consultation about what is supposed to be a community-owned celebration.

On April 17, the foundation confirmed widespread rumors that its 2011 Austin Pride parade, festival, and 5K run would be moving to September. In the press release, the AGLPF board explained: "In June, hundreds of cities compete with each other .... By moving to September, we envision building Austin Pride into a destination event." Founda­tion Presid­ent Karen Thomp­son said her board had originally been working with the city on both keeping to the June time frame and returning to the Long Center for a second year. However, she said: "As we got further into it, if we found a date that was OK with the Long Center, it was not OK with the city. If we found something with the city, it was [during] an in-town football game." When it became clear that a repeat of 2010 was impossible, other venues – including La Zona Rosa, Highland Mall, and Austin ISD's Toney Burger Center – were discussed. After a March 1 meeting with the city and members of the business community, Thompson said, "Ultimately, we decided that the best option was to move it." The foundation now has verbal confirmation from the city that it can use Fiesta Gardens for the festival.

Pride celebrations have traditionally been associated with the June 28 anniversary of the Stonewall Riots, but internationally the Pride season runs through summer and fall. While cities like Houston still schedule their festivities near the anniversary weekend, the Austin celebrations have been held on either the first or second weekend of June for the last decade. There has been discussion of moving the Austin date to September in previous years, following the example of the Dallas Tavern Guild, which has held its Alan Ross Texas Free­dom Parade in mid-September since 1983.

The change does not mean there will be no events organized by the LGBTQ community in June. QueerBomb, the coalition that formed in 2010 as counterprogramming to Austin Pride, has scheduled its celebration for June 3. In fact, there is no such thing as an official Pride body; however, the Austin Gay and Lesbian Chamber of Commerce took over as joint organizer of Austin's Pride events in 2002, before becoming sole organizer in 2009 and then spinning off the foundation as a separate body in 2010. Begin­ning with that first year of chamber involvement, arguments have surfaced over whether AGLCC has tried to control the nature of the main Pride event – a complaint sometimes leveled even by former chamber leaders. Former AGLCC President Jimmy Flannigan said, "As much as I find it curious that they're doing the move, the fact they really did not communicate with anyone in the community is entirely consistent with how they've behaved in the past."

Part of the foundation's task is to build on its 2010 events while not repeating some of the mistakes. Last year's festival at the Long Center received many positive reviews, but it was also very expensive. Foundation secretary Rick Holmberg attributed the expense in part to the increased scale of the event and complexity of dealing with the Long Center. "That learning curve is still there," he added, "but I think we've got our hands around it a lot better than last year." Holm­berg admitted there was also some "blurriness" inherent in the process because of board members who held posts with both the foundation and the chamber. For example, in 2010 Chad Peevy was chair of both AGLCC and AGLPF and, through his firm, Peevy Media, one of the festival's major contractors. "Some people were still writing checks to the [chamber], so we had to do some internal back-and-forth," Holmberg said.

The chamber and the foundation have now separated both their boards and their finances, but that does not mean AGLPF goes into 2011 with a clean slate. Despite last year's increased ticket prices and higher fees for concession booths, the new Pride board is still carrying a debt from 2010. (Full disclosure: The Austin Chronicle is among the foundation's creditors.) It is also unclear whether the business community, especially bars counting on a June boost in Pride-related business, will sponsor a September event to previous levels. This is not just an issue for the gay community; the body behind the First Night Austin New Year's Eve celebration has formally dissolved due to a lack of donors (see "First Night Austin," The Arts, April 29). So far the AGLPF has no actual cash for 2011, but, Thompson said, "I've probably got five to 10 thousand dollars in corporate sponsorships waiting." That is far short of even the $75,000 price tag for the 2009 event at Republic Square Park, but Thompson said that the three extra months of fundraising "should be a benefit, if people have us on their calendar."

However, the shift also puts the foundation's events on the same day as the centerpiece night of the Austin Gay and Lesbian International Film Festival, one of the Austin LGBTQ community's other marquee events. AGLIFF interim Executive Director Jason Scott Rosen said he contacted both AGLPF and AGLCC about the rumors of the move on April 13, but only received confirmation on April 18, after the new date had been set. AGLIFF is the "oldest continuous LGBTQ film festival in the Southwest," Rosen said, so after 24 years of operation "we have an established way of going about things and we don't plan on changing it." Last year, Rosen was working with Project Transitions, which eventually dropped out of Pride 2010 completely over contract issues (see "Split Pride: Gay Event Plans Marred by Tension," June 4, 2010). He's still optimistic that foundation and film festival can find some common ground: "We can discuss the idea and opportunities to partner together on making the day a success for both organizations." But those oppor­tunities may be limited. "During the day, I don't think there's going to be much chance for us to interact with one another," he said, "and I hope there will be an idea of partnering with us or supporting our efforts in the evening." Thompson said she hoped there would be possibilities for cross-marketing between the two events. Inevitably, there will be some clashes with daytime screenings, as the Austin Pride 5K run will start at 8am, followed by a parade at 11am. However, she said, "The festival starts at noon and is over at 6," meaning the foundation's events will be over before AGLIFF's big evening screening.

Thompson also hopes the new date will bring better outreach to students, as schools and colleges will be back from the summer break. "We will intentionally reach out to the student groups this spring to get their involvement," she said, "and we're already throwing around ideas for what that may look like."

QueerBomb/Pride Roundtable: Extended Remix
Here is the transcript of the forum between members of Pride andQueerBomb in its entirety 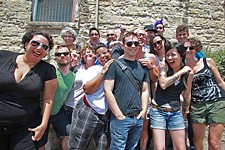 One Big Gay Happy Family?
QueerBomb and 2011 Austin Pride have much more than a hunch about the nature of the LGBTQ community and celebration