Time To Redraw Board Boundaries 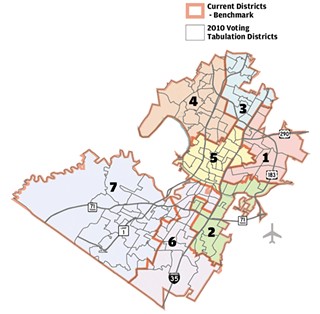 As if the AISD board of trustees didn't have enough to worry about, new census data shows that the district's seven single-member seats are due for a major overhaul.

On April 4, the board received a presentation showing voter populations in each electoral district. The disparity has caught the trustees off guard. Ideally, each trustee should represent 90,847 voters, with less than a 10% difference between the biggest and smallest districts. But the new data shows a 40% difference between the areas represented by trustee Robert Schneider and Vice President Vince Torres, automatically triggering redistricting.

Before the presentation, David Méndez of consulting attorneys Bickerstaff Heath Delga­do Acosta LLP assured board members that the redrawing process should be painless. But any new map will also redraw the balance of power in the district. This will be a far more radical shift than the last redistricting, which happened in 1992, but it continues long-term trends in population movement. In terms of representation, the undoubted winners are in southwest Travis County: Not only is it the fastest-growing area of AISD; it is also traditionally the most conservative. The big squeeze will come in North Aus­tin: With all three districts underrepresented by between 11% and 12%, it seems likely that someone's seat will be severely redrawn.

The new maps will have to be in place for the May 2012 elections, and that doesn't leave much time. Torres said he expects the board to receive a draft map in May, "then it will go to the public to get feedback ... then probably around August we will get back together and do the fine-tuning." The U.S. Department of Justice will need three months to ensure compliance with the Voting Rights Act, so, Torres said, "That puts us up against January, when people who are thinking about running need to know if they are in a district, given the new boundaries."