Formula One for All

F1 announces a little something for everyone 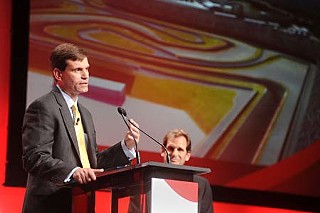 The Austin Formula One facility has a new name and a new tenant. On April 12, Formula One United States Grand Prix announced that the south­east Travis County site will be called the Circuit of the Americas, or COTA for short. The firm also confirmed a rumor that's been burning up the motor-sports Internet forums for months: In addition to hosting the U.S. leg of Formula One, the track will host MotoGP motorbike racing. "For the first time in American sporting history," said project Chair Tavo Hellmund, "both the two-wheel and the four-wheel world championships will be held at the same facility."

The MotoGP deal between Hellmund's firm Full Throttle Productions, Dorna Sports, and 3FourTexasMGP brings the sport to Austin for 10 years starting in 2013. More races are expected to be added to the site's calendar, as Hellmund has talked about hosting three or four major motor sports each year. The Austin F1 group also expects to announce a slate of human-powered events later this summer.

Chief investor Red McCombs said the track is "meeting the construction milestones" to be ready for the 2012 F1 season. The team also released more details about the complex and its operations outside of race weekends: In addition to a new conference center and midsize executive meeting suites, there will be a motor-sports museum and a 25,000-capacity outdoor music venue. Plans to announce a testing and research partnership with a leading automotive manufacturer have been delayed as the project managers are working with a second car company and hope to confirm both deals together later this year.

The group also announced the first round of educational opportunities and partnerships. Once completed, the track's purpose-built 5,500-square-foot trauma center will offer year-round EMS and medical student training. Before then, starting this fall, students from Texas A&M's School of Landscape Architecture will work on designing water conservation features for the site. The construction process will be recorded by students in St. Edward's University's Photocommunications Department, and there are plans for a summer internship for Huston-Tillotson business students. The project is also working with Del Valle ISD to produce a curriculum following the model of the Williams F1 team's Race To Learn educational software. Del Valle school board President Richard Vasquez said the track "is almost like our district's home field."