The Party Bus Is Over 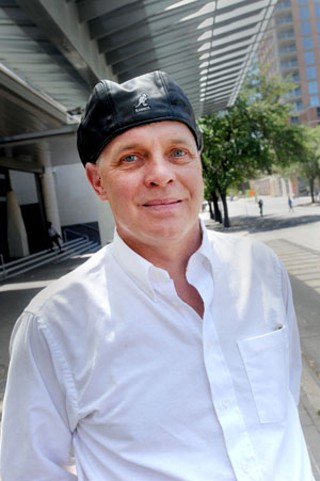 Driver Bruce Mamola is one of several drivers who say a staffing company failed to live up to payment promises. (Photo by John Anderson)

On March 25, a group of people gathered outside of S.A.F.E. Staffing's offices on North Lamar. It was the Friday after the close of South by Southwest, and about 50 shuttle drivers – temporary employees who had signed up to ferry throngs of sales-tax boosters between the Austin Convention Center and a set of sponsoring hotels – were looking for their paychecks.

The drivers say there was more than a flavor of chaos at the scene. Word spread that S.A.F.E.'s QuickBooks had crashed. A S.A.F.E. employee, Frankie Torres, asked one of the drivers to resubmit her tax information, which he'd mistakenly discarded. Driver Bruce Mamola says he waited six hours before collecting his check. When the drivers did finally get a peek at their pay after putting in long hours over nine days of sometimes messy work (including at least two incidents of passengers vomiting in vans), it wasn't exactly what they expected.

S.A.F.E. was hired by local transportation outfit R&R Limousine and Bus, the "official SXSW hotel shuttle." For a fee, a handful of area hotels signed up to be official places where Festival-goers could rest their (spinning) heads. In return, the hotels received publicity and a direct connection via shuttle to the convention center. The service ran from 8:30am to 2:30am, with the occasional driver-sympathy pickup thereafter.

R&R has run that concession for three years. This was the first time it had to contract with an outside firm to help handle the hiring. S.A.F.E. got the nod. They "were brought to me by our sales guy," says R&R owner Paul Arcediano. "They were great at recruiting and finding people."

But, from the start, things didn't run quite right. Drivers were told to show up at S.A.F.E.'s headquarters a half-hour before their duties began. Night-shift drivers would wait, beginning at 4:30pm, for the day crew to return from their last drops. Mamola and another driver, Bridget Feeney, say that they sometimes waited as long as an hour. Turns out, those waits would be off the clock.

"We were told you will not get paid until you park your butt down [in the van]," says Feeney. But even when drivers were in their seats by 5pm, when the night shift officially began, drivers say there wasn't always official accounting of that fact. "Some days they [kept time sheets]; some days they didn't," says Feeney. Partway through the event, she says, Torres told her that "we were going to go on the honor system" and that she could just email her hours to him. In terms of record keeping, says Arcediano, S.A.F.E. wasn't "doing anything I was expecting them to be doing."

There was also a question about whether the drivers should be considered hourly or contract employees. Mamola maintains that because he and his colleagues were required to wear (and, in some cases, purchase) uniforms and show up at a certain hour, they should have been considered hourly employees – and thus be eligible for overtime, which they did not get.

While S.A.F.E. promised only $8.50 an hour, Mamola claims that at an organizational meeting before the Festival, S.A.F.E.'s head of operations for the event, Robert Segrest – also a temp – said drivers would make as much as $1,800 with* tips. Driver Stephanie Smith (aunt of Chronicle staffer Jordan Smith) confirms that report. The ad that Mamola answered promised "hourly pay plus tips, avg $1500 in 9 days!"

None of it turned out to be true.

Feeney says she was paid approximately $700 for 87.5 hours of work over the nine days, amounting to about $8.05 an hour – 45 cents less than the promised base rate. She was not alone. "I talked to nobody who got their money," she says. Though the discrepancies on many checks were small when the hourly wage was applied, they proved much larger for drivers who worked overtime.

R&R attorney Matthew Tynan notes that, as part of R&R's agreement with S.A.F.E., the temp firm was responsible for keeping track of its drivers' hours and that it has refused to provide any records to support its figures. "These records just don't exist," says Tynan.

Just before S.A.F.E. was scheduled to issue checks to drivers, Arcediano says, the company contacted him to say it was out of money. "If I don't give them ... money, they don't pay anybody," he says. According to Tynan, Arcediano wired S.A.F.E. $70,000 to cover all of the drivers' salaries he believes he is responsible for. Though he admits that he owes the temp firm even more, Arcediano says that whatever is left amounts to S.A.F.E.'s profit. He says he has 30 days to make the payment – but that the staffing company still needs to meet some requirements of the deal for that to happen.

"We did a good job – and worked long hours with no breaks to do it," Smith wrote in an email. "We kept up great faces for the SXSW crowds. Many of us decorated our vans with lights, glow-in-the-dark sticks, whatever, to make it fun. We showed up and we showed up well. Trust me, we made it fun, but we didn't do this for fun. We did this for income."

[Editor's note: Due to an editing error, this passage originally said "before" tips rather than "with."]