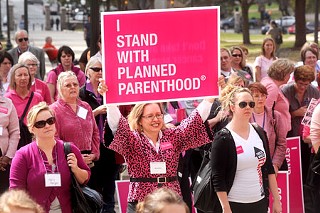 Nonprofit and public entities that provide reproductive health care services for low-income women would see their funding eviscerated by a measure passed by the Texas House. (Photo by John Anderson)

On April 1, members of the Texas House overwhelmingly approved a series of budget amendments that remove millions of federal dollars from the state's family-planning program and direct it instead to other programs – like providing mental health care for children – that have also been underfunded as a result of the state's $27 billion budget shortfall. According to the Department of State Health Services, if the cuts remain in the state's final budget, two-thirds of the family-planning budget, more than $60 million, will be taken away from providing low-income, uninsured women access to preventative health care services.

The decision riled a number of lawmakers who suggested that pulling funding from one needed area to fund another without tapping the Rainy Day Fund to help close some of these gaps was despicable. "I will not be put in the position of taking from one need and putting it to another when we're underfunding them both," Rep. Sylvester Turner, D-Hous­ton, said. "It's not good policy."

If the cuts survive, there will be only roughly $18 million left for each year of the budget cycle to provide funding for family-planning services to the state's providers, which include some Planned Parenthood clinics but also a number of public entities – like various county health departments and university medical systems – as well as smaller nonprofit clinics across the state. To add to the destruction of the family-planning program, another rider adopted in 2005 requires that $10 million from each year's family-planning budget be taken off the top and reserved for funding first the state's federally qualified health centers, which provide comprehensive health care, including family planning, to low-income clients. That means, in essence, there would be just under $9 million left each year for the fewer than 80 contractors providing family-planning services that have typically been awarded money from the roughly $100 million in biennial funding for family planning. In turn, the state is likely to see a number of small providers close up shop, says Fran Hagerty, CEO of the Women's Health and Family Plan­ning Association of Texas, which has 58 members. Many of her providers will simply be unable to remain in business if these cuts survive – which will likely leave scores of poor women, especially in more rural areas, without access to a local clinic. In all, there are fewer than 70 federally qualified health centers statewide, according to the Department of State Health Services' 2009 numbers, and many family-planning advocates worry that these groups won't be able to absorb the thousands of women (and men, who also access family planning funds) who will be left without access to basic preventative health care, thanks to the cuts pushed through by Repub­lican lawmakers.

Of course, among the amendments lawmakers approved that move money away from reducing unplanned pregnancies and providing other basic health services are some that are political in nature: Consider the amendment by Pearland GOP Rep. Randy Weber, who successfully fielded a proposal to move more than $7 million over the biennium from family planning into the Alternatives to Abortion program, which gives state funding to crisis pregnancy centers – unregulated entities that provide counseling and referrals to other programs for pregnant women but, notably, provide no actual health care. Weber suggested that the Alternatives to Abortion program (created by a rider from Sen. Tommy Williams in 2005 and given budget increases each subsequent session) is actually more cost-effective than family planning. He said his numbers show that clients served by the CPCs cost the state less than those seen by family-planning providers. What he failed to mention, of course, is that family-planning providers actually provide medical care – including pap smears, cancer screenings, and birth control, which generally helps prevent unplanned pregnancies.

An exasperated Rep. Mike Villarreal, D-San Antonio, asked Weber about how it could be that his amendment makes any sense: Taking money from programs that seek to prevent unplanned pregnancies and moving it to "a type of organization [that] counsels women who are pregnant already ... Isn't that counterproductive?" Apparently not to Weber, who said CPCs actually serve a lot of the same low-income women who would be using the family-planning money. So, in other words, it's a lateral move as far as he sees it.

Ironically, if you look at the Alternatives to Abortion program, that is hardly the case. Indeed, also on Friday, NARAL Pro-Choice Texas released its latest report on the program. It is not a pretty picture. The program, administered by the Texas Pregnancy Care Net­work, has "absorbed millions of dollars to cover its own administrative and overhead costs," reads the report, and has consistently failed to meet its self-set goals for the number of clients it would serve – in 2010, it was off by 20%. A full 70% of the centers funded by the program are "unlicensed, unregulated, non-medical organizations with no confidentiality requirements or oversight," reads the report. And, despite requirements that the centers, often associated with religious organizations, separate their state-funded services from any religious promotion, a 2009 NARAL investigation found that 67% of the centers their investigators visited "offered the investigator either prayer or religious counseling," a circumstance that the San Antonio Express-News found during an investigation of its own earlier this year.