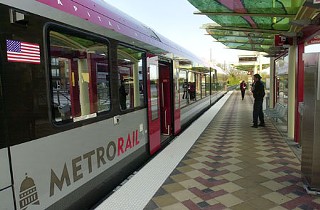 Now that we have MetroRail to get us to Leander, Austin voters can decide on a rail system to jet us around town. (Photo by John Anderson)

Does Austin want more rail? That's what the city wants to know from residents in five upcoming public meetings. The first two are "public scoping" meetings, required under the National Environmental Policy Act. According to city Transportation Director Rob Spillar, a scoping meeting "represents the start of a process to work with the public to define the issues of importance to the community related to the constructed, social, or natural environment that should be considered prior to implementing a major project." Spillar says previous studies have brought up potential issues such as impacts on river wetlands, animal species, and residential affordability. The two initial scoping meetings will be followed by three open houses, listed at right.