The tolls of a take-no-prisoners budget year 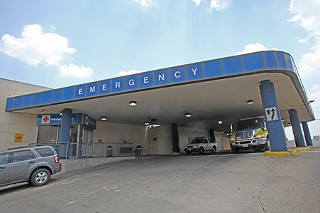 Austin's University Medical Center Bracken­ridge, the state's oldest public hospital, would be among many public institutions adversely affected by the Legislature's budget-slashing actions this year. (Photo by Jana Birchum)

House Bill 1 started as the draft state budget for the next two years. Now it's starting to look more like an economic suicide note, as the state's own analysis shows that the proposed cuts and layoffs could send Texas' unemployment rate climbing to more than 10%.

On March 23, the Legislative Budget Board issued a dynamic economic impact statement for the proposed budget. As it stands, the bill would cut state spending over the 2012-2013 biennium by $23 billion from current levels – a 12.3% drop, meaning direct employment by the state and local agencies funded by the state will inevitably fall. Using as a baseline the number of jobs created by 2010-2011 spending, the LBB predicts Texas will lose 335,244 jobs by 2013. Only 188,788 of those will be government positions: The rest will come from the private sector – some 146,457 private nonfarming jobs. Senate Finance Committee Chair Steve Ogden, R-Bryan, has already warned that the House budget proposal is unacceptably low, and with the full House scheduled to debate HB 1 on April 1, the job loss numbers will only fuel that fire.

In the analysis, LBB Director John S. O'Bri­en wrote, "Many of these job losses can be attributed to the steep downturn of the Texas economy during the past several years." However, the big question is whether Texas can afford further public employee job losses when its economy is already in a perilous position. According to the federal Bureau of Labor Statistics, the unemployment rate in Texas has remained at more than 8% since Sep­tem­ber 2009, hovering between 8.2% and 8.3% since August 2010. The LBB analysis shows unemployment rising 2.3% by 2013. Unless the Texas economy sees a miraculous turnaround in the next two years, this could well send the state unemployment rate above 10%.

Democrats are using the LBB report as leverage against the GOP's "cuts, cuts, and more cuts" budget mantra. Rep. Mike Villa­real, D-San Antonio, has already requested a second study – this time factoring in use of the Rainy Day Fund and closing corporate tax loopholes. Collecting the $1.2 billion the state forfeits through the high-cost gas exemption, he said, "would go a long way toward protecting education and keeping nursing homes open."

So far, neither the city of Austin nor Travis County has done a formal study of the local impact of these planned cuts. The concern is that, as the center of state government, Aus­tin will be hit disproportionately hard. There have already been layoffs at the Texas Edu­ca­tion Agency, while the University of Texas – one of the area's biggest employers – has slashed lecturing and adjunct teaching positions campuswide. Even the discussion of layoffs at Austin ISD has caused a major rift between senior administrators and employees.

Stacy Wilson, director of government affairs for Central Health, Travis County's health care coordinating body, said that her group's partner agencies have tried not to express the threatened cuts in terms of jobs so far, "just because you've got morale issues in hospitals." Yet cuts seem inevitable, and they could hit health care triply hard. Not only does HB 1 gut funding for AIDS medication and mental health services, but it zeroes out state funding for some programs that benefit from federal matching funds. Mean­while, Congress proposes to axe base funding for federally qualified community care health centers. With so many cuts pending for medical providers of last resort, Wilson said, "Until our partners know what it means to them, we don't know what it means to us."

Unsurprisingly, fiscal conservatives and the state's Republican leadership have championed the LBB report as a plus for the state because it will shrink government and leave Texas' underperforming tax base untouched. Gov. Rick Per­ry and Lt. Gov. David Dewhurst – both of whom appoint members to the LBB – have argued that the numbers mean more long-term private-sector growth. Even the more moderate Speaker Joe Straus took an implied swing at suggestions of long-term damage to the Texas economy. In a statement, he questioned "the validity of the assumption that requiring government to live within its means will lead to a downturn in the economy."

Yet private-sector positions will not appear out of nowhere just because the state fires employees. In its economic impact statement for HB 4, which would retroactively cut $853.6 million from the state's current 2011 spending, the LBB analysis predicts 22,752 lost positions, 9,767 of them from the private sector. The model predicts it would take until 2014 to replace those lost jobs.

None of these numbers take into account the cuts to services or the long-term impact on the Texas economy. On March 23, the Democratic members of the House Approp­ri­a­tions Committee voted unanimously against the bill, and Rep. Ruth Jones McClendon, D-San Antonio, warned about "the ripple effect of substantial job losses." Condemning the heavy cuts planned for education as nearsighted, she added, "Without a well-qualified work force, the jobs that we think will be brought into Texas will unfortunately go elsewhere."