The Austin Neighborhoods Council again asserted its importance in City Council elections with a reliably entertaining candidate forum last week. And the rigorous questions posed by the ANC – both at the forum and via an extensive questionnaire – provided valuable insight into the candidates and the questioners.

Place 1 candidate Chris Riley spoke first and unopposed. Challenger Roger Chan wasn't there; Josiah Ingalls was, but wasn't allowed to speak. The Austin Neighborhoods Council requires candidates to fill out the questionnaire if they are to speak, and Ingalls told the Chronicle he didn't get the extensive, 28-question query soon enough to complete it before the forum. But having the field to himself didn't mean Riley, the incumbent, had an easy time. The first question focused on Riley's support of the Park planned unit development, a mixed-used project slated, symbolically enough, for a Barton Springs plot next door to the forum's location at the Austin Energy offices. City Council approved the PUD despite well-noted opposition to the proposed project exceeding the neighborhood plan's height limit by 36 feet (see "The Park Is in the PUD-ing," Jan. 21); Riley said it was a case in which the council had to assess "communitywide needs, against which we have to balance the neighborhood plan." Transportation needs and the project's proximity to a corridor where Capital Metro is implementing rapid bus service led Cap Metro board member Riley to vote in favor, he said. That question set the tone, with nearly all follow-up questions cut from the same cloth; for Riley, only questions about single-member districts and transportation addressed anything beyond neighborhood association and homeowner concerns.

The Place 3 discussion was the night's largest, with incumbent Randi Shade and challengers Kathie Tovo and Kris Bailey in attendance. Speaking first, Shade – who called her "track record probably as good as anyone on the council on neighborhood issues, except for Council Member [Laura] Morrison" – was also pressed on the Park PUD. Like Riley, she voted for the project (along with the rest of the council, except Morrison). Among the community benefits it offered, she noted, was a restaurant, meaning "you can have an alternative to Hooters."

Unlike Riley, Shade has been the decisive Water Treatment Plant No. 4 swing vote, a position former ANC Vice President Tovo addressed both in person and in her questionnaire replies. "I would not have voted for WTP4, and I believe the city should have better vetted the environmental and financial aspects of the project," she wrote. Holist­ic­al­ly, Tovo sought to outline her newly launched campaign in her opening remarks, citing four areas: affordability; "completing communities," or creating a less car-dependent live/work/play environment for residents; promoting neighborhood schools; and ... a mystery, as the strict timekeepers cut her off.

WTP4 was also an issue for Bailey, running on a Libertarian platform centered on marijuana decriminalization. Money spent on WTP4 exemplifies the city "focusing on the needs of tomorrow and neglecting the needs of today. ... My water works just fine," Bailey said. The sentiment was echoed by former council member and Place 3 candidate Max Nofziger, who was not present but wrote of WTP4 in his responses, "I stopped it in 1987-88, and I will stop it again." His answers were the most provocative: "The current planning effort should be called 'Imagine Dallas'," and "The City of Austin is utterly irresponsible in its spending, and should shelve all unnecessary projects, including and especially the downtown trolley."

Place 4 incumbent Laura Morrison and challenger Eric Rangel spoke last. Like Planning Commissioner Tovo, the ANC is largely in agreement with Morrison's votes and policy positions, and she didn't receive nearly as many pointed questions as Riley or Shade. Rangel, however, had a difficult time with some of the ANC's wonkier questions, like its request for him to name an instance when he supported a neighborhood association's position in a contested land case. What specifics Rangel did offer included his opposition to "the monopolization of Austin Energy." He also called for nonspecific "tax breaks" for families moving into Central Austin.

Cognizant of Morrison's ANC support, Rangel closed by saying he knew he was "walking into the lion's den," but "in politics, that target's always on your back." It was a description Morrison countered moments later, saying, "I have to explain to Eric: you guys aren't lions, you're pussycats!" 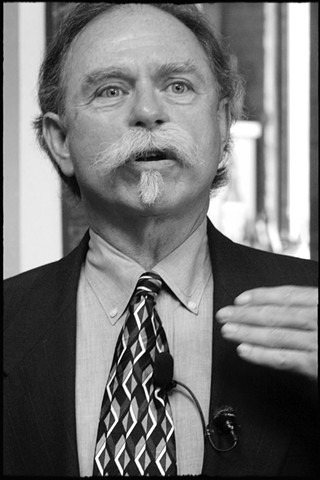 Since the forum, the ANC has announced its endorsements: Tovo and Morrison got the nod for Places 3 and 4, but in the race for Place 1, the group gave no endorsement, instead issuing a challenge to the incumbent Riley that he "demonstrate more leadership based upon his passion and background."

Forum or Against 'Em

The fun didn't stop at the ANC event. There are many more upcoming council candidate forums, which we've done our best to list below. – W.D.