The consequences of hitting the send button The fallout from the City Council e-mail dump continued last week as local advocates separately filed an ethics complaint and a lawsuit over issues raised by the initial release of internal council e-mails in response to an open records request. On Feb. 28, Nelson Linder, president of the Austin NAACP, filed an ethics complaint against Mayor Lee Leffingwell and Mayor Pro Tem Mike Martinez. The complaint charges that their off-the-record comments about city officials last April reflect a potential conflict of interest under the City Charter – "clearly unethical and perhaps illegal," reads the complaint – and moreover that the e-mailed comments carry "racist and sexist overtones." And on March 1, online news publication the Austin Bulldog, source of the original open records request, filed a suit in district court against the mayor and all six council members, charging that the officials had violated open records laws when they unnecessarily delayed their response to the information request, and had "withheld" other records that they "created on their personal computers or phones, or SPARK messages created while transacting public business." (SPARK is an online chat program that council members have used to communicate with aides during council meetings.)

Linder and NAACP Vice President Stanley Coleman filed the "Fraud, Waste, or Abuse Allegation" with the integrity unit of the Office of the City Auditor, charging that the exchange of comments between Leffingwell and Martinez during an April 8, 2010, council discussion of Fire Department hiring matters violated both the City Charter's prohibition on council members interfering in personnel matters (Charter Section 2.7) and the city ordinance ban on representing a private interest against the city (Code Section 2.7.62). During the meeting, Leffingwell and Martinez were critical of a proposal by Austin Fire Department Chief Rhoda Mae Kerr to hire an outside consultant to design a new hiring procedure to help diversify AFD staffing (they asked for a two-week delay for more information, but were defeated 4-3, joined by Laura Morrison).

In an exchange of dais e-mails released last month, Leffingwell had called Kerr a "company man," and Martinez described City Manager Marc Ott and Assistant City Man­ag­er Mike McDonald as "jokes" for supporting the proposal; Martinez also criticized Afri­can American Firefighters Union President Bobby Johns as having been "bought off" to support the consultant hiring. The NAACP complaint says the comments "slander" Ott, McDonald, Kerr, and Johns, and effectively undermine the city's legal position by being "in support of the position of the white firefighters union against the interest of the city of Austin." 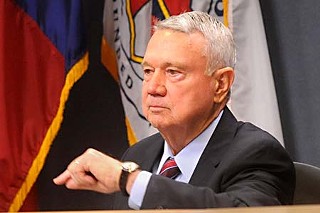 Linder told the Chronicle that he believes Leffingwell's and Martinez's animosity toward Kerr and the other administrators dates back to an earlier disagreement over her promotion of a black administrating officer. Even if that isn't so, Linder said, "The fact that they attacked their own employees, it seems to me, is a major problem, because you know it's going to be used in court [against the city]." Asked why he believes the comments have racist or sexist overtones, Linder said since it's "public knowledge" that Kerr is gay, calling her a "company man" (a union term describing someone whose first loyalty is to his or her employer) is implicitly a sexual slur. "I just think it's ugly," Linder continued, "and those kind of comments in this kind of context, with three folks who are black and one white female who was gay – that was my take on that."

[Note: After this story was originally published, Michelle DeCrane, spokeswoman for the Austin Fire Department called to inform us that Fire Chief Rhoda Mae Kerr is "not gay."]

Linder acknowledged that he is himself occasionally undiplomatic in his language, and that in another episode discussed in the council e-mails (following council's rejection of the proposed settlement of the Nathan­iel Sanders II family lawsuit), he publicly described the mayor, Martinez, and others as "liars" and "snakes," among other things. "Was the language the best language? Of course not," Linder said. "But I can't take it back – I meant what I said because of what they did, how they conducted themselves. They basically lied that night, in my opinion." Linder did emphasize that, in his judgment, "the biggest issue is the ethics issue, not the race issue. The biggest concern is the larger issue [concerning personnel and the unions], perhaps even a conflict of interest."

Leffingwell and Martinez have since apologized several times for the e-mail comments, and Linder says he'll "take that for what it's worth. ... They have to change their behavior and give the city manager some respect as he is properly due," he said. "I'm glad they decided to apologize to the city manager, but more importantly, how are they going to work with him?" In addition to the ethics complaint, Linder sent a letter to Leffingwell and Martinez under the signature of a new group calling itself Concerned Citizens of Austin, which includes such prominent African-Amer­icans as Gregory Vincent, Wilhelmina Delco, Jeffrey Richard, Bertha Means, and several others. In a statement released last week, the group expressed "a sincere desire to improve the quality of life for all people, particularly those who have been historically underserved by our City." Concerned Citizens of Austin criticized the officials' "unprofessional behavior" and met separately with the two officials this week. Both men described the meetings as "very productive" and said the dialogue and positive actions will continue going forward.

Leffingwell and Martinez declined to comment on the substance of the pending legal matters. Martinez said he takes both matters "very seriously and will do whatever is necessary to resolve both matters." He added that whatever the context, his own e-mailed comments were "inappropriate, unnecessary, and unprofessional," and that he's "working to repair the relationships I have damaged by my inappropriate comments." Leffingwell similarly described his own comments as inappropriate, adding that he hopes to learn from the episode. He said he's always been a "strong supporter" of diversity throughout the city, including the Fire Department, and that the only dispute at that council meeting was how best to accomplish the task.

In the Austin Bulldog filing, former county Judge Bill Aleshire, representing the "investigative reporting" website published by Ken Martin, charges that the city took too long (33 days) to produce all intra-council e-mails for 2010 (redacted for private information) and may have provided only some of the communications covered by the Texas Pub­lic Information Act. "It appears that Austin Council Members," writes Aleshire, "think they can individually decide which emails and text messages about public business the public can see." He charges that the e-mails thus far produced do not include all the public documents required under the law, and specifically that the city did not try to produce e-mails that might exist on council members' personal computers or smartphones, or on instant-message applications like SPARK.

Moreover, some council members provided fewer e-mails than others (e.g., Bill Spelman only three), and there were no e-mails discussing such controversial public issues as Water Treatment Plant No. 4 or the Formula One racetrack incentives. Aleshire's brief suggests that the absence of such e-mails is itself suspicious.

The lawsuit asks the court to require the production of any additional public records covered by the act, wherever they might be located, and to enjoin the officials from concealing such records in the future.

Leffingwell told us he could not comment directly on the pending lawsuit, except to say, "That's a legal issue that's going to have to be resolved legally."

Posted here is the one-page NAACP ethics complaint filed with the city of Austin's Integrity Unit (Auditor's Office), and the initial filing in the Austin Bulldog's lawsuit against the mayor and City Council Members.