Tweet
print
write a letter
In the Texas criminal justice system, eyewitness misidentification is by far the leading cause of wrongful conviction – faulty eyewitness ID was implicated in 86% of Texas DNA exoneration cases. Two years ago, lawmakers tried to enact a bill that would take the first steps to improve the reliability of eyewitness identification; the law would have created a model policy for the state's law enforcement agencies in conducting live and photo lineups. The bill was a casualty of House chubbing, but this year it is back and moving quickly toward passage.

On Feb. 22, lawmakers in the House Criminal Jurisprudence Committee heard testimony on Rep. Pete Gallego's eyewitness ID bill (House Bill 215), and that afternoon voted unanimously to pass it to the full House for consideration; a week later, on March 1, the Senate Criminal Justice Committee heard testimony on a companion measure, Senate Bill 121, by Sen. Rodney Ellis, D-Houston, before also voting unanimously to pass the bill to the full chamber for consideration.

To date, there have been 44 DNA exonerations in Texas, and, according to the Innocence Project, a total of 266 post-conviction DNA exonerations nationwide since 1989. (A true number of wrongful convictions is difficult to predict, but it is noteworthy that DNA testing is possible in just 5-10% of all criminal cases, reports the IP.)

A group of seven Texas exonerees – who, taken together, served more than 140 years in prison before exoneration – traveled to the Capitol to testify in support of the eyewitness ID bills. Below is a summary of a handful of their cases and excerpts from their testimony before lawmakers.

"I didn't know there was another James Giles. ... I was the only African-American sitting in the courtroom – how hard was it for [the victim] to point at me? ... I thank God I got my name back through DNA that proved I was not [her attacker]."

Giles served 10 years in prison, and 14 as a registered sex offender, after receiving a 30-year sentence for a 1982 rape of a pregnant Dallas woman. The victim was repeatedly raped by three men, and in a lineup she identified Giles as one of her attackers. Another witness failed to ID Giles, but even though, at 29, he was 10 years older than the other suspects, had two prominent gold teeth that the victim did not mention to police in any descriptions of her assailants, and had an alibi for the night of the crime – he was out having dinner with his wife – he was convicted in 1983. As it turned out, the real perpetrator was another man, James Earl Giles, who had long been a suspect in the crime; although prosecutors knew that before trial, they failed to provide the information to Giles' defense. Giles was exonerated in 2007.

"My conviction was based on eyewitness identification. One person accused me of rape and regardless of the evidence ... I could present, I did present, to contradict this person, I was convicted. ... I'm believing in this committee to do what you all feel is right. ... I believe in the fact that we need a change; our criminal justice system is broken."

At 20 years old, Chatman was wrongfully convicted of a Dallas rape that he did not commit. He was picked out of a lineup by the victim, who said that although she hadn't been wearing her glasses during the attack, she "got enough of a glance of his full face" to be able to identify him. Chatman spent 27 years in prison before becoming, in 2008, the 14th man in Dallas County cleared by DNA evidence. The woman's real assailant has never been identified. "I've heard prosecutors say the system works. My brother Tim was tried by 12 and carried by six to his grave; the system will never work in Tim Cole's case. I implore you to finally [pass the eyewitness ID bill]. ... My mom said at [Cole's] funeral, 'Today the world knows [Cole] as a convicted rapist; one day the world will know him for who he really was.' ... I hope that you will pass this [bill] in the memory of Tim Cole and never forget."

Session's older brother, Timothy Cole, died in prison after being convicted of a Lubbock rape that he did not commit. He was erroneously identified by the rape victim because of biased and faulty police lineup procedures. In 2009, Cole became the first person in Texas to receive a posthumous pardon. He would have been 50 this year and, had he lived, would have been released from prison in 2011 after serving 25 years. Session now serves as the policy director for the Innocence Project of Texas.

"Now, during the time of the offense, I was at work. There was a time card to show what time I punched in to work and what time I got off from work. There was also my employer who came and testified that it was virtually impossible that I could have committed the offense. ... The system is only as good as the people that run the system. And I do feel like this [bill] will kind of curb some of the misidentification that happens. ... Because there's no way that the victim should have been presented with six photos and only two people [were] shirtless. I mean, that's ridiculous. I believe it is something that needs to be addressed, that needs to be fixed."

Johnnie Lindsey was 30 years old when he was arrested for the 1981 rape of a woman near White Rock Lake in Dallas. The woman said she'd been attacked by a shirtless black man. She was given two photo lineups in the days after the rape but was unable to ID her attacker. The case went cold, and it wasn't until a year later that Dallas detectives mailed a new set of photos to the woman: Of the six photos she was shown, just two depicted shirtless black men; one of those was Lindsey. Lindsey spent 27 years in prison before being exonerated by DNA evidence in 2009. The woman's real attacker has never been found.

"I've lost my mom, my dad – a lot – in the course of being in prison. ... I had never seen these people [the victim and her male companion] before in my life. ... I really believed in the justice system – I mean, I was a fan of Perry Mason as a kid. I really believed in the justice system – you know, innocent until proven guilty. You know, when you get caught up in the system, you find out it's a little bit different. Now, I don't know if it was because of me being black or what, but it was different. ... Around my 24th year, I was offered parole by the parole board. Keep in mind, I was in prison for robbery. ... Which is good, you want to go home. But there was a catch – that I go to a sex offender class. I said: 'No, there is no way that I can go to a sex offender class. I'm already in prison for something I didn't do, and now you want me to admit [to doing] something sexual.' ... No, I just couldn't do it. ... And I had to sacrifice another six years because I had to stick to my truth: My truth is, I did not do the robbery itself, and now you want me to admit to that I was a sex offender.

"And the stigma of being a sex offender – first being in prison for something you didn't do, and then [being labeled] a sex offender? ... Thirty years in prison for a crime I did not commit. And I'm asking you all, please, so that no one else has to go through what I went through, House Bill 215 needs to be passed."

Dupree was 20 years old when he was convicted of aggravated robbery, a crime that allegedly happened in connection with the rape of a 26-year-old woman in Dallas. In 1979, the woman and her male companion were carjacked, and she was abducted and raped. Dupree was charged with both crimes, but was eventually tried only on the robbery charge. He was sentenced to 75 years in prison. In July 2010, Dupree was paroled; he was finally exonerated in January 2011 after DNA testing failed to connect him to the crime. Dupree, now 51, has spent more time in prison for a crime he did not commit than has any other Texas exoneree.

For more on exonerations in Texas, visit www.innocenceproject.org. 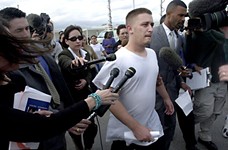