Tweet
print
write a letter
It was "unknown unknowns" vs. "shoulda, woulda, coulda" as the evidentiary hearing in the House District 48 race wrapped up Monday, Feb. 7. Now Master of Discovery Rep. Will Hartnett, R-Dallas, must judge whether Rep. Donna Howard, D-Austin, should keep her seat or whether challenger Dan Neil should be granted a special election. His initial findings are expected to be released to the House on Friday.

In his closing statement, Neil's attorney Joe Nixon invoked ancient Greece, modern-day Egypt, and Benjamin Franklin, and argued that the four days of laborious examination of ballots and the voters who cast them was not about his client. Rather, Nixon said, it was about protecting the democratic process. It was clear that, no matter his calculations, Nixon could not eliminate enough votes for Howard to give Neil the win. After every possible deduction, he argued that her Election Day victory of 16 votes, which shrank to 12 in the December 2010 recount, currently stands at three votes. However, because of what he claimed were unresolved questions about a handful of ballots from residents who may now have left the district, Nixon said, "You cannot discern a victory." To be fair to democracy, Nixon said, he's requesting a special election.

History is against Neil: Since 1979, when the House last revised the rules, every challenge except one has either been thrown out by lawmakers or withdrawn by the contestant. However, Neil's call for a special election does have a precedent. In 1981, San Antonio Democrat Al Brown challenged his loss to Republican Alan Schoolcraft and hired Wood as his attorney. "It didn't do me a lot of good," Wood said. "I got my client a new election, and a very close election turned into a rout." 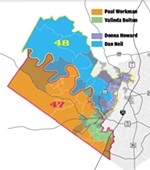