The city can take a joke, people – but garbage is not doo-doo

Tweet
print
write a letter
There's a scandal under way at City Hall that's rocked our government to its very foundation, calling into question fundamental principles of transparency and citizen input.

I'm talking, of course, about the campaign to rename Solid Waste Services the "Fred Durst Society of the Humanities and Arts."

Some background, for the dozen of you who aren't up to speed: Late last month, SWS launched an online program for citizens to submit and rank names for the department, ostensibly to distance SWS from passé landfill imagery and to emphasize sustainability. "Our mission has changed, and with that changed mission, we need to present a different message to the public," said SWS Director Bob Gedert, announcing the contest. "Our department name can present a new image."

Within hours, submittals were flooding the servers – witty entries like Fostering Energy Conser­vation and Ecological Sanitation, or FECES, and Austin Sustainability Services, or ASS, are a representative sampling of the dozens of anally fixated entries from users apparently under the illusion that SWS handles human solid waste, not trash. Another inspired submission was Get Our Austin Thoroughly Sanitized Everyone, or GOATSE – so named for the infamous Internet shock photo that, once seen, can't be unseen. That entry has since been pulled, but as of this writing, Lemon Party – so named for another NSFW meme – is sitting pretty in fifth place.

But then there's first place, and from this sea of puerile ass-hattery, "Fred Durst Society of the Humanities and Arts" stands out. You could call it a backhanded compliment – but bear in mind, it's named for the frontman of a band that emerged from a giant toilet bowl on its first major tour. Kyle Hentges, the 24-year-old Austinite who initially suggested the society, e-mailed the Hustle, attaching a video clip he calls "part of his inspiration": a mash-up of crunk diva Ke$ha's autotune abortion "TiK ToK" cut with several of Durst's Limp Bizkit singles, the aural equivalent of a Four Loko blackout bender.

After he submitted the name, he says, "I just threw it on my Facebook feed and went to bed. ... I just figured I'd throw my suggestion in the ring and go to bed because I didn't figure anything would come of it. ... I guess the name gave a few people some epiphanies as to the correlation between Mr. Durst and Waste Management.

"Although I've done quite a few things for the nookie while rolling, rolling, rolling, I can't consider myself a bona-fide 'Bizkit-Bandit' (as their fans refer to themselves)," Hentges writes. "However, the last week has inundated me with way more information about Fred Durst than I ever wanted to know. Did you know his nickname is 'Bizkit?' Look on his Wikipedia page if you don't believe me (and I hope that Wikipedia page is a good enough source to refer to the Durstmeister by (please refer to him as 'Fred "Bizkit" Durst' in the article)). As for Bizkit/Durst's oeuvre, just listening to it on the radio while skateboarding as a youth has probably mentally scarred me to the point that I mentally associate waste with lyrics like 'GIMME SOMETHIN' TO BREAK,' 'I KNOW YALL BE LOVIN THIS S*** RIGHT HERE,' et al."

"As for the garbage trucks," he continues, "they could play 'Break Stuff' with lyrics like 'RIGHT NOW I'M DANGEROUS!' when the truck is loading garbage (so people know to stay away and be safe). ... When the truck takes off, a red megahorn resembling His Durstness' red backwards cap (which is mounted on top of the cab) plays the chorus to 'Rolling' as it drives off."

Unfortunately, it's unlikely Hentges' incredible suggestions will come to pass as the ultimate naming decision falls to City Manager Marc Ott. That's not to say that SWS hasn't enjoyed the attention Durstgate brought them – with outlets as disparate as MTV, NME, and NPR all reporting on the naming (and NPR shamelessly trafficking in the same doo-doo jokes as many submissions – for the last time, SWS traffics in trash, not sewage!).

"We knew that with Austin, we would get lots of creative input," Jennifer Herber, public information officer with SWS, says. While noting that the city "could've taken it down" once it became apparent the website's untenable suggestions would get the most votes, Herber said the "point was to get public input" – which they indeed got, plus "a lot of attention."

Voting ends today, Thursday, Feb. 10, at midnight – to the city's relief, one imagines. The name's expected to be unveiled around Earth Day, April 22. Regarding rumors that, regardless of the department name, Durst could be invited to the announcement, Herber says the idea's been discussed, but "our people haven't talked directly to him." Should that come to pass, "we'll definitely let everyone know."

As for Hentges, he says, "international media attention aside – I'm currently the poor college student cliché personified," looking for any available writing work. Moreover, he continues, "I don't want this to just be about Fred Durst, Austin, or myself. I want to acknowledge the hard-working men and women who take our garbage every day, working in one of the most thankless professions in the country. ... I do care quite a bit about the laborers in our fine city and feel they should get more credit and appreciation, regardless of what moniker the city adopts."

Trash talk the Hustle at www.facebook.com/CityHallHustle. 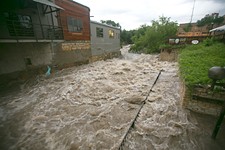