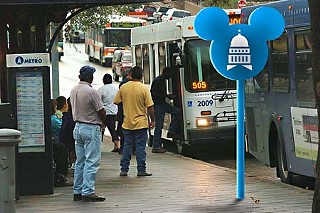 Capital Metro's critics have long branded the organization as a Mickey Mouse transit agency – but could it now officially become one?

Perhaps that's not literally how it will turn out, but corporate names and logos could become a fixture on Cap Metro vehicles and facilities if its board of directors approves a proposal floated by CEO/President Linda S. Watson at a Feb. 3 meeting of the board's rail committee. Watson said she wants to start exploring the sale of "naming rights" as a way for Cap Metro to generate new revenue. It's a concept sports fans have been familiar with for a couple of decades now, especially at the pro level – your favorite team might once have played in a stadium named after a local dignitary or landmark but now more likely plays at American Airlines Center, Minute Maid Park, or FedExField.

"The reason to do it is revenue for the system," Watson said. After the past two years found Cap Metro teetering on the brink of financial crisis (and reducing service to balance the books), that rationale caught the interest of the committee. "You can have a multiyear revenue stream. It can help you plug holes in budget gaps. That's what a lot of systems across the country are doing instead of cutting service. They're doing naming rights to cover their operating funds.

"If we were to do this with our commuter rail line, we could possibly use revenue to cover the subsidy for the system," Watson continued. Board members and agency executives would probably love that prospect – they've taken heat in recent years for spending on a rail line allegedly used mostly by suburban commuters with other transportation options, while making cuts to services to the transit-dependent (people who are poor, have disabilites, or otherwise can't drive a car). Watson also suggested it might be used with Austin's planned bus rapid transit line.

Watson said the concept of transit companies and other government entities doing this is still new, but said one of Philadelphia's transit centers is now AT&T Station; Chicago has bids out for its train lines, bus lines, and a bridge; and public park trails in Maryland and Virginia have logos splashed on them.

"The Florida Turnpike wants it to be named Disney World Turnpike," Watson said. "The schools are trying to get Mickey Mouse and Donald Duck faces on the school buses. In Florida, in fact, an elected official said anything the state owns is up for sale." But she acknowledged the elephant in the room: "I doubt if that sentiment is accepted everywhere." She also gave the less obnoxious (and more relevant) example of Cleveland's bus rapid transit line, which sold its naming rights to a pair of hospitals and adorned the vehicles with rather tasteful logos that were no more obtrusive than the ads currently appearing on Cap Metro buses. She said the sale was supposed to bring $11 million over 10 years to the Cleveland transit agency.

The proposal was met with a mix of excitement and trepidation by the rail committee. Board member Beverly Silas, a retired AT&T executive, immediately moved to send the proposal to a vote of the full board, only to be informed that the committee couldn't do so because it wasn't posted as an action item. She then said she'd like to post it for the committee's next meeting, scheduled for Wednesday, Feb. 16.

Other members liked the idea of bringing in badly needed cash but wanted to proceed with caution. When this reporter suggested to committee Chair John Langmore that corporate logos splashed all over public property in keep-it-weird Austin might go down like a lead balloon, he partially agreed. "My guess would be that most people would view it the same way I view it," he said. "It's clearly an opportunity for our transit system to generate value that would be put back into the system for the benefit of customers and for the benefit of the community. Increasing public transportation is a good thing for Central Texas. One of the biggest restrictions on our ability to do that is financial resources. This is a way to add to those.

"On the other hand, there are some issues with turning everything into a public sector advertisement. Honestly, I'm not far enough in my thinking or discussions with others to know what's the appropriate balance between the two. I look at that BRT bus from Cleve­land – you know what, having two hospitals put their names on there in a very tasteful, discreet way didn't bother me much. Might a giant Mickey Mouse [get] splashed over every bus? ... I would do that slightly differently.

"I think there's some place on that spectrum that is appropriate, and we have to explore it. There's no question that we can't just reject it out of hand."