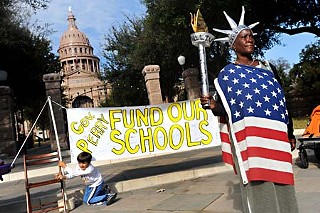 • New WTP4 Lawsuit On Jan. 14, Save Our Springs Alli­ance, the Spicewood Springs Road Tunnel Coalition, and Bull Creek Park neighbor Joe Wheeler filed a lawsuit against the city of Austin hoping to stop further work on Water Treat­ment Plant No. 4. Specifically, the plaintiffs charge that the 6-mile-long water transmission tunnel presents a danger to the park and the nearby Balcones Canyonlands Preserve and that the city has taken insufficient study and precautions to prevent environmental damage. The tunnel shaft site, at the intersection of Spicewood Springs Road and Old Lampasas Trail, is within the park, and the plaintiffs charge: 1) that the project is an illegal taking of public land that has not been fully subjected to a "Chapter 26 hearing" as prescribed under the Texas Parks and Wildlife Code, and 2) that the city and Austin Water have not fully considered "feasible and prudent alternatives" to the plant and tunnel project. (The city contends that it has complied with all applicable laws.) An earlier federal lawsuit, in defense of the Jollyville Plateau salamander, was dismissed in December 2010; the SOS Alliance has also issued an "intent to sue" letter on grounds that the project violates the agreements governing the BCP. – Michael King

• UT on the Tube On Jan. 19, UT-Austin announced it has finalized a 20-year, $300-million deal with ESPN for a TV network devoted to airing UT sports (in HD of course) along with lectures, arts and music events (including some from the surrounding community), university news, and more. The deal was negotiated by UT Athletics' multimedia rights partner IMG Col­lege. The 24-hour network, due to debut in September, will have exclusive coverage each season of one football game and eight men's basketball games, among other sports events; it will also rebroadcast games carried by other networks and will air some state high school sporting events. "This agreement provides significant new resources to enhance faculty and academic support," said UT President Wil­liam Powers Jr. in a press release. "These funds will be targeted at faculty and academic programs ... We will begin this process by creating two new chairs, one in the Department of Physics and the other in the Department of Philosophy." Hook 'em! – Mark Fagan

• Rodger That, Council The Austin Bulldog published a story Tuesday alleging that Austin City Council members may be violating open meeting laws when they participate in regular one-on-one and two-on-one meetings to discuss upcoming agenda items. The meetings are posted on several members' online calendars and do not constitute a quorum. The practice was apparently brought to the Bulldog's attention by ChangeAustin co-founder Brian Rodgers, who had met with Council Member Chris Riley and was "floored" by what he recounted as Riley's words: "We know how we are going to vote by Thursday [council meeting day] except for [Council Member Bill] Spelman, who's a wild card." (Riley has described the claim as out-of-context, referring to larger, recurrent issues.) Around the time the story was published, a complaint was filed with the Travis County Attorney's Office alleging that council had violated the Texas Open Meetings Act; later that day, Rodgers stepped forward as the complainant (announcing, in the process, he would not run for council this spring). The county attorney's office says it's reviewing the complaint; Riley, citing advice from the city attorney that the meetings do not constitute an Open Meetings Act violation, says, "It would deal a severe blow to the effectiveness of local government if elected officials were only able to discuss issues of importance to the community at one weekly public meeting." – Wells Dunbar