When the rulers call for sacrifice, who do they mean?

Unsurprisingly, there was plenty of triumphalism in the air at Tuesday's inauguration festivities, though one could be forgiven for thinking we were celebrating V-E Day rather than the Texas Republicans' crushing of the Democrats last November. Both Lite Guv David Dewhurst and Gov. Rick Perry featured plenty of saber-rattling bluster, which Dewhurst kicked off with a reflexive citation of the "greatest generation." Before long he was bombing Europe and visiting the beaches at Normandy and evoking a spirit of "sacrifice" on the part of "all of American society."

Perry wrapped himself in the bloody flag as well, although both speakers were more eager to recall the Last Good War than dwell on the protracted quagmires of the last decade, whence neither the news coverage nor the film elegies are sufficiently obscured by nostalgia. Why all this ceremonial breast-beating? In the service of "sacrifice," of course, which for the greatest gener­ation (in Dewhurst's nod) meant buying war bonds, paying taxes (!), and, if necessary (in Perry's phrase), making "sacrifices that no man or woman should ever endure."

As for contemporary Texans? Our great sacrifice will assuredly be the highest priority on both men's 2011 legislative agenda: to "balance the budget without raising taxes," according to Dewhurst. That was the drumbeat, although Perry did nod briefly in the direction of the larger obligations of community and government: "As Texans, we always take care of the least among us. The frail, the young, the elderly on fixed incomes, those in situations of abuse and neglect, people whose needs are greater than the resources at their disposal – they can count on the people of Texas to be there for them. We will protect them, support them, and empower them, but cannot risk the future of millions of taxpayers in the process."

Neither Perry nor Dewhurst even tried to explain just how the state will both "take care of the least among us" and simultaneously avoid raising taxes on "the people of Texas [who will] be there for them." (Not even a patriotic peep about the contribution expected of those doing well?) That elaboration was left to House Appropriations Chair Jim Pitts on Wednesday morning, who was charged with defending the draft state budget that landed with a thud on legislators' desks Tuesday night (late enough to avoid dispiriting the inaugural celebration). The long-anticipated news remains daunting. Some highlights:

• Elimination of about 9,600 full-time state positions

• A 10% cut in already inadequate Medicaid rates for providers (and no allocation for growth in population, usage, or prices)

• A $7 billion cut in public school funding, or $9.8 billion from what would be allocated under current school formulas (expect more public school uproar similar to Austin's in recent days)

And so on. As Emily Ramshaw summed it up in the Texas Tribune, "The first run at the budget is $31.1 billion smaller than its predecessor – a 16.6 percent drop. [It] seeks to meet the state's budget shortfall, estimated at between $15 billion and $27 billion, without increasing taxes or tapping into the $9.4 billion Rainy Day Fund." (The $27 billion figure is the deficit measured against the cost of current services, the $15 billion a conservative spin arrived at by anticipating cuts not yet made.)

There is some good news, of a sort. The deficit will likely require cutting back on incarceration – at least one prison unit will be mothballed – and the ax was withheld on what is euphemistically termed "border security." (Indeed, fiscal conservative but would-be Sen. Dewhurst is demanding a tripling of the number of federal agents on the Texas border – no mention of taxes to be paid there, either.)

None of this should be surprising, but in cold print it's breathtaking – maybe it will at least force honest officials to quit bragging we're better off than California. It's worth noting that the argument on the Rainy Day Fund has yet to commence (though since we're already nearly $5 billion in the hole on the current budget, that's no panacea), and howling doctors and suburban parents (who voted for this state of affairs) may yet force some backtracking on Medicaid and schools (there's another big whack at higher education as well). One might hope that a slowly recovering economy would lessen the blows over the next two years – but laying off 10,000 people (with the inevitable multiplier effect) will hardly give consumer spending or the sales tax a shot in the arm.

So it's hard times, you're saying, and what is the alternative? Setting aside the fact this deficit is not just cyclical, but structural – those cutting property taxes in recent sessions knew full well they would be underfunding the Texas future – unless the Lege cushions the crisis with some revenue enhancements (taxes, fees) this budget will only make things worse, socially as well as financially. A wan but hopeful coalition of progressive groups organized through the Center for Public Policy Priorities, the TexasForward coalition, is making a few suggestions: use the Rainy Day Fund (this crisis is indeed what it was designed for); make use of whatever additional federal funds are available (e.g., the education funds that Perry has blocked for political reasons); establish new, equitable sources of revenue that can respond to growing public need; and expect none of this reformation, a decade in the making, to be a one-session project.

I wish I could be optimistic that the folks of TexasForward will be measurably successful in their noble efforts, and that the ruling faces of Texas politics are not the vainglorious mugs of Perry and Dewhurst. But in fact, their counterparts crowd the House and Senate, and like their leaders, they will be insisting that Texas can get by just fine while "sacrificing" schoolchildren, the elderly, college students, the physically and mentally ill, and the poor.

In the end, the people "balancing" the budget are not the ones who will actually be making those sacrifices. 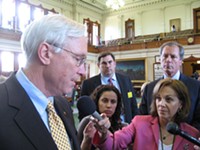 Not So Sine Die: What's Special About More of the Same?
The Legislature doesn't quite end