One More Detour on Holly Street Lela Castro at her home, beside the Holly Street Power Plant (Photo by Jana Birchum)

Before there was the Holly Street Power Plant, there was Lela Castro's childhood home. In the late Fifties, the city took possession of it, knocking it down to make way for a new electric generating facility.

Her parents put up little resistance, taking what the city offered for the property and moving south of the river. "When the city comes in and tells you you've got to go, you don't have much choice," said Castro. "You just take it in stride."

Castro had by then married and left home, but she eventually ended up back on Holly Street, this time to live in her grandparents' house, built in the early 1900s. With a power plant as its next door neighbor, the old house has endured half a century of loud, foundation-rattling clamor; regular dustings of soot; and a constant threat of fires and fuel spills that have marked much of the neighborhood's perilous history.

The noise alone made it impossible to fling open the windows on mild spring days or to entertain company in the backyard under an umbrella of pecan trees. Years ago, Castro and her husband, Sonny, left Holly Street and moved to South Austin to keep a closer eye on her ailing mother. But the Holly Street home remains in her family, and she intends to return to the beloved house and the neighborhood, where she is still very much a familiar face.

Castro, who serves with other neighborhood representatives on the plant's closure committee, showed up at City Hall on Jan. 13 expecting to witness a historic City Council vote that would kick-start the dismantling of the power plant, a metal and steel Goliath that stands 15 stories high on a 22-acre site on the north shore of Lady Bird Lake. But council delayed action on the demolition vote until Jan. 27 to allow further consideration of the $6.1 million cost difference between the top two competing contractors (see "TRC Speaks: Not Just a Knockdown"). So Castro and a group of the Holly neighbors left City Hall with flagging spirits, although they weren't much surprised, considering the number of times city councils past and present have delayed action on the plant.

The natural-gas- and oil-fired facility has a fairly lengthy rap sheet. The official incident reports date back to 1974, when 10,000 to 20,000 gallons of fuel oil spilled. There was another spill in 1985, this one from a fuel line rupture. In 1988, polychlorinated biphenyl waste leaked from storage drums, and two years later, some elements containing PCBs were measured in Town Lake (now Lady Bird Lake), leading to a temporary shutdown of the plant. Fuel spills occurred twice in 1991, twice again in 1992, and three times in 1993, with the last incident igniting a fire.

Reports of fuel spills continued throughout the rest of its history, but another fire in 1994, followed by a bigger blaze on Halloween night in 2001 – just as young trick-or-treaters were starting to make their rounds in the neighborhood – created a greater sense of urgency to shutter and decommission the plant. Once it's completely demolished and remediated, much of the land will be converted to a park. 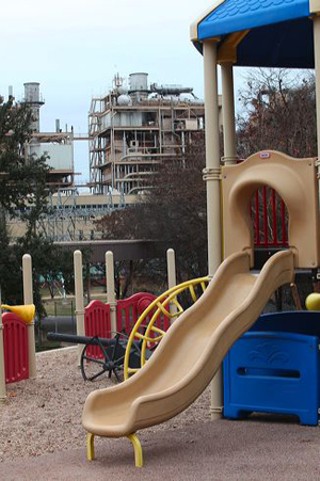 Even before the power plant's closure in September 2007 – two years after its scheduled shutdown – the Holly Street area in Central East Austin had begun a cultural transformation, gentrifying the predominantly Mexican-Amer­ican neighborhood. The most visible evidence of this change appears, on nearly every street, in the form of ill-fitting townhomes and duplexes towering over wood-frame houses. As with many neighborhood plans, the Holly plan's stated goals of preservation of historic homes and the addition of desirable, affordable housing have given way to the cyclical forces of real estate booms and busts. On the corner of Riverview and Robert T. Martinez Jr. streets, for example, an ambitious teardown and rebuild project just south of the plant stalled when the recession hit, leaving an empty lot with a now-weathered "for sale" sign.

Old-timers in the neighborhood fear that high property taxes will eventually drive them out, as they've driven out so many others. There are rumors that even the better-off young newcomers, the ones who live in the oddly shaped houses, are struggling to pay their taxes, thanks to the neighborhood's convenient proximity to Downtown and increasing desirability.

"All of us Mexicans here are getting old," said Jesse Ramirez, standing outside his white wood-frame house earlier this month, on an unusually warm January afternoon. His elderly parents live just down the street, and, like everyone else with roots in the neighborhood, they are trying to fend off the high cost of gentrification. The thing about the new people moving in, he says, is that they want you to fix up your house. "Sometimes we don't have money for that," Ramirez said, resting one hand on a fence, the other hand on the cane he uses to steady himself. Casting his gaze two blocks north to the power plant, Ramirez recalls the years when the odor of gas wafted through the neighborhood and smoke from the fires hung like dark clouds over the tiny houses. "Then, after white people started moving in," he says, "that's when [the city] started talking about closing the plant."

Gavino Fernandez, an Eastside activist who came of age during the Seventies-era Brown Berets, has built his take-no-prisoners reputation on haranguing elected officials on a number of counts, chief among them their foot-dragging on the Holly Street Power Plant. Fernandez grew up on East Third Street, and even from that distance he could hear the rattle and hum of the plant, which grew louder as he'd make his way south to his grandmother's home on Haskell Street, where he lives today. In retrospect, Fernandez credits former Council Mem­ber Max Nofziger, former Travis County Attorney Ken Oden, and former Travis County Commissioner Marcos De Leon for spearheading negotiations that set into motion the plant's long journey to closure. Though he was critical of Gus Garcia when he served as a council member, and then as mayor, Fernandez seems more appreciative of Garcia's work to shutter the plant, despite the council member's backpedaling on a 1995 vote to close two of the power plant's generators, only to reverse himself in 1999 with a vote to restart the generators, at the request of Austin Energy, to prevent potential power outages.

One neighborhood woman, who did not want to be identified, has accepted the fact that new faces are coming into the neighborhood. But some of the newcomers would do well to adjust to the existing culture rather than try to dramatically change the flavor of the neighborhood. "They want you to change your whole lifestyle," she says.

The Holly Neighborhood Plan was adopted by City Council in 2001, but its implementation has been stymied by disagreement over the selection of a "contact team," which, according to city bylaws, serves as the go-to committee on neighborhood matters that involve new development and other aspects of the neighborhood plan. Observers say the issue centers on the politics of old guard vs. new guard, with the original crafters of the neighborhood plan, including Fernan­dez, fearful of not just a loss of control, but a loss of history. Residents whose families go back generations in the neighborhood understand the emotions at stake. "The contact teams have total control" of future planning, says Castro. "Everyone's just leery at this point."

Before the Holly neighborhood became predominantly Hispanic, the houses were mostly occupied by Anglo families, said Castro, whose family, under her maiden name of Cruz, was among a small number of Mexican-American families with homes in the area. The Stocktons lived kitty-corner to the Cruz home, and next door to the Stocktons were the Smiths, and on down the street and around the corner were the Wallaces, the Baileys, and the Petersons. "We were all friends," says Castro. "We played kick the can, hopscotch, hide-and-seek – it was all real wholesome." Gradually, the white families began moving out; most of them, as Castro recalls, pulled up stakes before the power plant began operating in 1960. Some of the older generation – that is, older than Castro – still meet for reunions of the old Tenth Ward neighborhood, she said.

Castro intends to return to City Council on Jan. 27, for what she hopes will be a vote to start the demolition of the plant. She understands the need for council to weigh the cost differences between the top bidders, but in her view, the entire Holly neighborhood has already paid a pretty hefty price in its own right. "Money should not be an obstacle right now, considering all these years the community has been a prisoner to the Holly power plant."

Of course, Castro is also anxious to tie up loose ends and return to her grandparents' home at the end of Holly Street. "That house isn't for sale," she warns, lest anyone consider making her an offer. "I love that house and want to go back there." 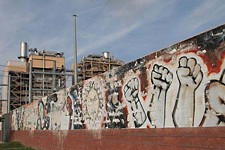