Making the Best of a Bad Voter ID Bill

Dems hope to turn a lemon into lemonade 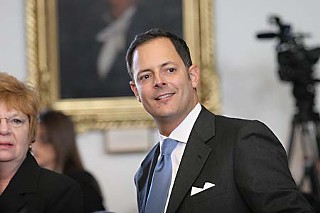 The overwhelming Republican tsunami in November guaranteed that in almost every respect, the 82nd Legislature will not be a repeat of the 81st. One clear example: voter ID, the issue that shut down the Capitol two years ago. Back then, the Democrats were able to accomplish that through "chubbing," a filibusterlike technique that slowed down the pace of business in the House, basically running out the clock on the voter ID bill. (The biennial Lege session only lasts 140 days.) But they were helped by their numbers, a strong 74-76 minority. Now, there are only 49 Dems in the House vs. a 101-Repub­lican supermajority. A voter ID law would seem to be a fait accompli, and an opening-day conversation with the Demo­crats' point man on the issue seemed to confirm that; Dallas Rep. Rafael Anchía spoke not in terms of killing voter ID but coming up with the fairest possible bill.

"We buck up and fight like hell," Anchía said on the House floor after the swearing-in ceremony, when asked what the outnumbered Dems could do. "It's just too important to the civil rights and voting rights of Texas citizens to just lie down."

But this time, fighting like hell means pushing for amendments, not monkey wrenches. "We're going to create clear contrasts, and we're going to lead with a bill similar to an amendment we had last session that creates a fair and balanced photo identification regime," he said, explaining that people without photo IDs would be able to submit affidavits proving their identification, which would allow them to vote on the regular ballot.

The issues revolve around what is appropriate identification to cast a ballot: Republicans want a law mandating a photo ID at the polling place in addition to the voter registration certificate and allege the possibility of massive voter fraud. Democrats say voter ID is a solution in search of a problem – Republicans fail to provide examples of voter impersonation actually occurring, and in any case, such fraud would be an ineffective way to tip an election. What it's really about, Dems counter, is suppressing the vote of the elderly, minorities, and women – three demographics less likely than others to possess photo ID and more likely to vote Democratic.

"You have to have the vote-saving affidavit," Anchía said of what appears to the Dems' new bill-improving, rather than bill-killing, tactic. "It's not different than what we do today – you have to sign an affidavit currently when you vote with your driver's license; you sign an affidavit saying you do not have your voter registration card. I propose the same kind of affidavit in reverse." Anchía said lying on such an affidavit would be perjury, which currently carries penalties of up to $10,000 and 10 years in jail. "We want to prevent thousands of Texans from being disenfranchised," said Anchía, "so we're going to fight to make sure we come up with good policy, not just political fodder."