We have the Legislature to thank for this mess 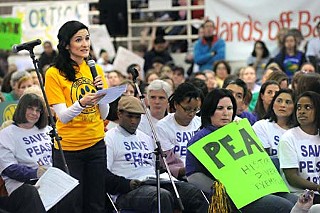 Becker Elementary School parent Christy Anderson-Ewing voices opposition to school closures at one of two AISD forums held last week, this one at the Burger Center on Jan. 13. (Photo by John Anderson)

When the Austin Independent School District released a draft list of nine underused campuses that could be closed to cut costs, there was immediate backlash from neighborhoods fearful of losing their schools. Yet what has been buried in the understandable parent outrage is one simple fact: Not only are the proposed closures a long-term solution to an immediate cash-flow problem, it's a solution that would not affect that problem.

The district estimates it will face a $54.4 million budget shortfall in the 2011-12 academic year. However, according to board of trustees President Mark Williams, the earliest the district could consider any closure of campuses is 2012, or more realistically, 2013. Still, Williams says the two issues are inseparable: "It would be great if we had enough kids in those areas to fill those schools, but we don't. And I wish we didn't have a $50 million budget shortfall, but we do."

It all comes down to money and space. In 2009, as part of its districtwide efficiency study, consulting firm MGT of America recommended that the district take a full inventory of all its buildings to see what it has and what it needs. Last April, the 72-member Facility Master Plan Task Force – comprised of AISD administrative staff, teachers, principals, parents, and community members, and coordinated by consultants DeJong-Richter – held its first meeting. After nine months, its focus centered on two campus-related issues: One, that some schools, especially those in North and Southwest Austin, are too crowded. Two, that others, particularly those in the urban core, have empty seats. On Jan. 10, the task force laid out an option to the board of trustees to close nine schools – Barton Hills, Brooke, Joslin, Oak Springs, Ortega, Pease, Sanchez, and Zilker elementaries, and Pearce Middle School.

School closures are political dynamite. There are still deep scars in East Austin from when the district shuttered the original Anderson High School in 1971, and former AISD Superintendent Pat Forgione endured the worst defeat of his career when he tried to turn Webb Middle School into a boys' academy. Even just redrawing attendance zone boundaries can cause deep animus, as seen by protests over which elementaries should feed into the new Gorzycki Middle School (see "Proposed Southwest School Boundaries Spark Concerns," Nov. 14, 2008).

The latest proposal is still only a rough draft, so the district held public forums on Jan. 12 and 13 to gather feedback. Both meetings drew crowds estimated to have exceeded 1,000, with students and parents in the maroon and gold of Zilker and the white and purple of Pease, plus contingents from Barton Hills, Ortega, Sanchez, Brooke, and Pearce. Mentions of closures were booed, while an audience proposal to sell off the Carruth Administration Center – the location of Superintendent Meria Carstarphen's office – was applauded. Some protesters accused the district of targeting East Austin schools, since five of the nine campuses are east of I-35. Others attacked the task force for ignoring school performance, since all eight elementaries scored either "recognized" or "exemplary" in the state's accountability rankings. One major complaint is that the task force did not include transfer students in its calculations, leaving neighborhood activists feeling punished for having a school to which parents want to send their kids. 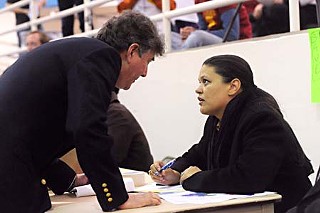 Zilker Neighborhood Association President Andy Elder blamed the consultants for giving the task force unrealistic guidelines: As a result, he said, their conclusions "do not reflect the day-to-day realities of these schools, which are packed and successful."

The inclusion of Pearce surprised many, since community members fought for many months to drag the campus out of the danger zone of the state's punitive accountability system. Now that it's reached "academically acceptable" status, it's the district that could pose the school's biggest threat. Pearce PTA Vice President Betty Johnson said: "If this was a court of law, this would be double jeopardy. How many times can you try a school?"

Even just outlining the possibility of school closures has sent unexpected ripples through the political establishment. Ever since then-Mayor Kirk Watson briefly stepped into the chaotic search for a superintendent in 1999, the city and the district have retained a respectful distance. That made it all the more surprising when, on Jan. 12, Mayor Lee Leffingwell issued a statement that if the community is to remain committed to reducing urban sprawl, "Losing good schools in the urban core would plainly make many of our goals as a city dramatically more difficult to realize." He has been joined in his criticism by Austin Democrats Rep. Elliott Naishtat and Congressman Lloyd Doggett, who placed the blame on Gov. Rick Perry for consistently cutting support for schools while scoring anti-Washington political points by rejecting federal funds like last fall's EduJobs cash (see "Perry Poisons Education Funding," Sept. 17, 2010).

Most curiously, even if the proposed closures were to happen, they would not save the district from sweeping cuts. According to the task force, in 2012 the district would see savings and cost avoidance for a grand total of $2,038,552 – less than 1/20th of the current deficit projection. AISD trustees have already received staff recommendations for $11 million in savings for the 2011-12 school year, mostly from changing employee insurance contributions. Yet that would still leave the district deep in the hole, and trustees have warned that, in addition to program cuts, they may be forced to consider declaring financial exigency – the first step to furloughs and layoffs of staff who would otherwise be protected from such. "We have to find some mix of facilities, people, and services in order to reduce our spending," Williams said.

The bigger question now is how deep into its reserves the district is able – or willing – to dip. Raising the district's bond rating from AA to AAA, combined with a shift to self-insurance, meant pumping more money into the reserve coffers to cover its new financial obligation. That reserve, which district Chief Financial Officer Nicole Conley-Abram has advised against tapping deeply, now stands at $142 million. At the same time, the board has refused to raise new money: Last fall it bowed to business community pressure and declined to hold a property tax election to raise the maintenance and operations rate (which pays for daily operations). That meant that the tax rate stayed static while certified taxable values within the district dropped 3.66%. The result: less property tax money coming in. While that decision split the board, Williams stood by it. Even though Travis County voters have traditionally supported school tax increases, he said, "We would have been so far down the ballot that the people who pulled the straight-ballot lever wouldn't have voted in our race."

However, that decision was made on the assumption that the state would fill in any shortfall through "target revenues" by repaying districts what they are losing from falling property taxes. But in his preliminary address to the 82nd Legislature, Senate Finance Committee Chair Steve Ogden, R-Bryan, told lawmakers that there are "serious structural problems" in the state's $35 billion Foundation School Program and that target revenues would be costing the state an extra $5.5 billion. For the Legislat­ure, that will be one potential target for cutting its $27 billion structural deficit – and further state cuts would turn AISD's currently projected $54 million deficit into wishful thinking on the way to much worse. It's already jumped dramatically: As recently as November, the district was only predicting a $30 million shortfall. If the state indeed butchers the Foundation School accounts and makes cuts in formula funding, the worst case scenario could be as high as $120 million – roughly 12% of the district's already overstretched operating budget.

The Schools Proposed for Closing Are: 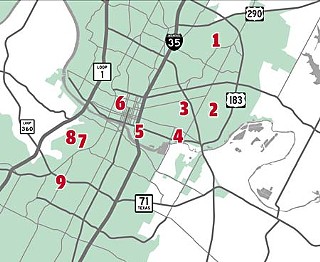