The seduction of the South Texas Project 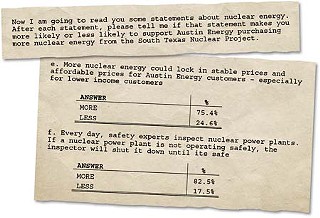 Last summer, when Pedernales Electric Cooperative ousted general manager Juan Garza, some onlookers – many of them environmentalists – thought what was bad news for Garza might prove good news for Austin Energy, then in search of a new GM to replace the retired Roger Duncan. City Coun­cil Member Bill Spelman suggested including Garza as a last-minute candidate, and Duncan himself put in a good word for the former PEC head, who had in fact held AE's general manager position once before, prior to his tenure at the scandal-plagued electricity cooperative. With the candidate list already winnowed to three finalists, however, City Man­ag­er Marc Ott determined it was too late to include a new applicant. Instead, he hired California utility exec Larry Weis, and within a few months, Garza – to the chagrin of many of his green supporters – had taken a job peddling the nuke.

"We are shocked to hear the news that ... Garza has taken a job promoting nuclear power with New Jersey-based NRG Energy," wrote Public Citizen's Tom "Smitty" Smith in a September press statement. "While Garza rightfully acknowledges the danger climate change poses to Texas," Smith continued, "nuclear power's life cycle carbon footprint, exorbitant cost and extreme construction time belie the claim that nuclear is a solution to the climate crisis." Given that Weis – who took AE's helm Sept. 27, 2010 – told a public forum audience in June that, if hired, he "wouldn't touch" new nuclear power, Ott's decision perhaps left those in the green community's anti-nuke wing feeling they'd dodged a bullet. Judging from NRG's recent activities, however, there was another bullet waiting in the chamber.

In November, Nuclear Innovation North America – a partnership between NRG and Toshiba – hired locally based Littlefield Consulting to survey 700 registered Austin voters on their thoughts about nuclear; the recently released results suggest that not all AE ratepayers would agree with Smith's assessment of the nuke. According to NRG, in fact, the respondents showed "significant support for the proposed expansion" of the South Texas Project – despite Austin's uneasy past with STP, a nuclear project so controversial it brought voters to the polls eight times, at first to approve AE's 16% stake and then ultimately, in 1981, to ditch it, having lost patience with skyrocketing costs and delays. By then, however, it was too late, as no one wanted to buy Austin's share. When the plant finally opened for business in 1989, it was 10 years behind schedule and that 16% share alone had racked up more than $800 million in cost overruns, creating debt AE customers are still paying off today. (As of Sept. 30, 2010, AE's records show $290 million in outstanding bonds related to STP, according to AE spokesman Carlos Cordova.)

None of this history made it into Little­field's November poll, which took a glass-is-half-full approach with statements like "25% of Austin's power needs already comes from nuclear energy and it has been very cost effective," and "over the years, the cost of this power has become lower than the cost of power generated by natural gas and coal," and "nuclear power plants are cleaner for the environment than plants fueled by coal or natural gas because they don't produce emissions." Respondents were asked for a new assessment of nuclear after each statement; toward the end of the poll, when asked "having heard more about these issues ... how important a role do you think nuclear power should have in meeting Austin's future power needs?" 37.5% of respondents said "very important" while another 37.5% said "somewhat important." (See the entire poll here.)

NRG is right about STP's cost-effectiveness for AE, says Weis, "but you have to understand the fundamentals of these types of generation. Some types are very capital-intensive upfront, and as soon as your debt's paid off, or down, your cost becomes very cheap, and that's what's happened." AE's generation plan – passed tentatively by City Council last spring pending approval of an affordability forecast that's still in the works – recommends continued involvement in STP's two existing units. However, NRG and STP filed a combined application in 2007 to build two more units, and while AE's plan advises "no participation" in them, it does leave the door open to nuclear power purchase agreements. Weis confirms that while AE "is not interested in ... investing in an ownership position," the utility would consider a PPA. However, he notes: "We're not shopping for any baseload resources. [Nuclear is] a baseload, high-cost resource ... and it just doesn't fit our portfolio right now."

NRG's efforts to court AE are nothing new, says Weis, but the "acceleration of marketing efforts" is – and the poll, says Weis, "was a surprise to us." Still, he says, "We have not received anything from NRG that tells us, 'Here's the price; here are the terms; here are the conditions.'" Furthermore, he says, if AE were considering adding baseload resources, it would be looking at natural gas as well, because it can be obtained more cheaply and – if it's from a "clean-burning, high-efficiency" plant – has a relatively low carbon footprint. "So you can displace CO2 usage with natural gas as well," he says. "It doesn't have to be nuclear."

The bottom line, says Weis, is that "Austin Energy is going to do its resource planning. We're not going to let NRG try to tell us what to do." That planning, at the moment, is focused squarely on AE's "very ambitious renewables target," he says. "My big work right now on resources is renewables – particularly wind and solar – and our distributed energy work ... and all of the energy efficiency work that we've got. That's on-task and on-target."