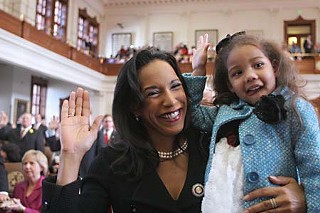 Austin state Rep. Dawnna Dukes' 3½-year-old daughter, Leila, raises her right hand with her mother as representatives take the oath of office on Tuesday's opening day of the new legislative session. For more coverage, see "Let the Show Begin," and "This Way to the Big Top!" (Photo by Jana Birchum)

• Mobility Bond Gets Thumbs-Up For what it's worth, somebody outside Austin likes our new approach to transportation. New York City-based Drum Major Institute, a progressive think tank (www.drummajorinstitute.org), recently released a list of what it considered the five best and five worst city policies enacted in 2010, and the transportation/mobility bonds Aus­tin voters passed in November made the good list. The organization liked that the bond package paid more than lip service to transportation modes other than the automobile. "Recognizing that they could never build enough highways to eliminate traffic congestion, lawmakers instead put a $90 million bond issue on the ballot to improve Austin's existing streets and make them more hospitable to pedestrians and bicycles. ... For affirming that transportation investments must include more than just new highway miles, Austin's bond walks straight onto our list of the best policies of 2010," the DMI wrote. – Lee Nichols

• More Services for Deaf Community Officials from Gallaudet University were in town Jan. 12 for the opening of a new resource center for deaf students at Austin Community College. The center is one of a handful of regional centers for Gallaudet, the nation's premier institution for educating the deaf. Austin is a magnet city for deaf people and their families, in part because of the reputation of the Texas School for the Deaf. According to local officials, Austin's deaf and hard-of-hearing population hovers around 50,000 people. Given the community's prevalence, the Austin Police Department has developed policies for dealing with deaf residents; despite these policies, however, there have been reports of miscommunication and other problems between the deaf and law enforcement. For more, see "Tone Deaf," Dec. 3, 2010. – Jordan Smith

• A New Look at Fluoride On Jan. 7, the U.S. Department of Health and Human Services announced a proposal to lower the recommended level of fluoride added to municipal drinking water – setting the cap at 0.7 milligrams per liter of water, down from the currently approved range of 0.7 to 1.2 milligrams. (The amount currently added to Austin city water is lower than the newly proposed cap.) Simul­taneously, the Environmental Protection Agency announced it would initiate a broader review of the maximum amount allowable in drinking water. Fluoride has been subject to much public controversy in recent years with scientific research suggesting that claims of its effectiveness in preventing tooth decay are exaggerated and that potential health risks outweigh benefits (see "Fluoridation Under the Microscope," Nov. 12, 2010). The joint HHS/EPA announcement reiterated claims that fluoridation prevents tooth decay but said that in recent years the multiplication of other sources (toothpaste, mouth rinses, and food processing) may have contributed to increases in dental fluorosis (tooth discoloration) in children. "EPA's new analysis will help us make sure that people benefit from tooth decay prevention while at the same time avoiding the unwanted health effects from too much fluoride," said Peter Silva, the EPA's assistant administrator for the Office of Water. Before the HHS announcement, Neil Carman of the Lone Star Chapter of the Sierra Club wrote to the mayor and City Council concerning a National Institute of Environmental Health Sciences study, which he described as "the 24th scientific study linking fluoride in water to lower IQ's in children." Recounting the findings at length, Car­man said they provide "compelling evidence why the City needs to end its outdated policy on fluoride and finally acknowledge the growing scientific evidence on how harmful even tiny amounts of highly toxic fluoride may be to children."– Michael King