KUT and the Statesman expand their portfolios

The Cactus Cafe closed, then reopened after its transfer to KUT radio. (Photo by John Anderson)

1) KUT PLUCKS CACTUS Words like "iconic" and "legendary" were echoed in the public outcry over UT's decision to close the Cactus Cafe and lay off veteran booker Griff Luneburg to cover raises for other staff. For students and music lovers, it was less about Cactus operations than about the arbitrary process of closing, reopening, and ultimately transferring management from the University Union to local NPR affiliate KUT.

2) FAREWELL, STUDIO 6A Twenty-five years after Lyle Lovett's debut on the Austin City Limits Presents stage – singing backup to Nanci Griffith – Lovett headlined the final taping of the music show on the UT campus. The show returns in 2011; Austin City Limits Live at Moody Theater will be based out of the new W hotel building on Second Street, a purpose-built home that will allow the management to host large gigs as well as the kind of intimate performances that have defined ACL.

3) RADIO BLUES After 29 years at KUT, deejay Larry Monroe read the writing on the wall and finally hung up his headphones. His Phil Music show was canceled last year, and he gave up his Blue Monday show in August. Yet another venerable piece of old Austin fades away.

4) AUSTIN GETS FRIENDED Facebook co-founder Mark Zuckerberg may have forgiven Austin for the drubbing he took at South by Southwest 2008: The social media giant opened a local office in October, with a promise of creating 200 jobs. Of course, the $1.4 million the firm will get from Gov. Rick Perry's Texas Enterprise Fund may have soothed any ruffled feathers.

6) AIN'T MY NEWS News 8 Austin – Time Warner Cable's soporific fulfillment of its monopoly cable obligation to public service – is rebranding itself as "Your News Now!" so you'll know where to find the local weather report "on the eights!" Not clear why TWC is running away from its acronym, but it might have something to do with those nasty cable fights over channel revenues.

7) TRIBUNE COLOSSUS In only its second year of operation, the online Texas Tribune news site extended its nonprofit tentacles into partnerships with The New York Times, KUT-FM, and Editor Evan Smith's former haunt, Texas Monthly. Can respectable journalism be saved by conglomeration and multiple platforms? Ask somebody respectable.

8) 'STATESMAN' SUCCUBUS On a less-glamorous local note, monopoly daily the Austin American-Statesman gobbled up both hipster comedy journal The Onion and online city politics newsletter In Fact Daily, in marketing arrangements officially without editorial control. Question is, how long can the Bat Cave Bore tolerate both better reporting and funnier jokes from its subsidiaries?

9) WOXY MOVES HERE, CLOSES Do modern audiences want deejays or just playlists? Web-based broadcaster WOXY was a standard-bearer for indie music on the Internet, but even the popularity of its Lounge Acts series couldn't keep it thumping on your stereo. The onetime FM station from Cincinnati moved to Austin in 2009, but the harsh economic climate and lack of a major corporate sponsor pushed it out of business in little more than six months. 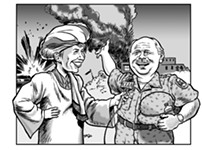