Terrorism strikes a little too close to home 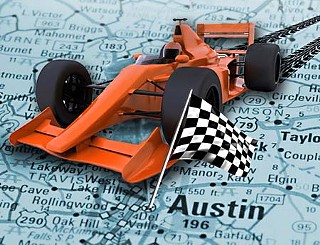 Formula One roared into Austin.

1) NONE DARE CALL IT TERRORISM In February, tax protester Joseph Stack Web-posted an anti-government manifesto, set fire to his house, and flew his small plane into IRS offices on Highway 183, killing one man and destroying the building. Media outlets, otherwise reflexively dropping the "T" word whenever possible, suddenly went all vague and mushy when describing a middle-aged Caucasian terrorist.

2) TAKE THE MONEY AND RUN In April, Louanne Aponte, former executive director of nonprofit Family Connections, went missing – and with her, hundreds of thousands of dollars. Investigations revealed allegedly falsified bookkeeping and embezzlement that spelled the demise of the family services agency. In December, Aponte gave up hiding in Venezuela and returned to face justice.

3) CITY CAUGHT FLEET-FOOTED City officials insisted that in 2009 they hadn't heard of the city's scrap tire program problems until the Chronicle told them. In July, they about-faced, acknowledging that they had in fact been alerted to the issue months earlier than previously acknowledged.

5) WHAT'S THAT ROAR? It's the Formula One cars lining up for the first Austin Grand Prix, scheduled for 2012. The surprise announcement in May that Austin will host one of the world's biggest sporting events caught everyone by surprise and left the county and city scrambling to respond.

6) FAREWELL MR. EA With only one new member on the board of trustees, Tamala Barksdale, and Superintendent Meria Carstarphen settling in for her second year, it seemed business as usual at Austin ISD. But the departure of longtime Education Austin President Louis Malfaro after two decades as the face of the teachers' union meant an unprecedented loss of institutional memory.

8) COUNTY GOES COURTING County officials announced the purchase of the original Downtown courthouse tract – bordered by Third and Fourth at Guadalupe – from the Austin Museum of Art. Purchased for $21.75 million, the site housed the county's first courthouse and jail and will be developed into a multistory civil courthouse, pending a bond issue likely this fall.

9) A ROAD NOT TAKEN Travis County commissioners in May rescinded county support for building State Highway 45 in Southwest Austin, a move that drew the wrath of suburban residents who believe the long-delayed roadway will resolve the prickly issue of traffic congestion on Brodie Lane and surrounding areas.

10) WHAT'S YOURS IS MINE In January, over local protest but after extracting some concessions on roads, monitoring, and restoration, the Travis County Commissioners Court voted to permit a Texas Industries aggregate mine at Hornsby Bend, citing the lack of county land use authority to do anything else.