The year in drugs 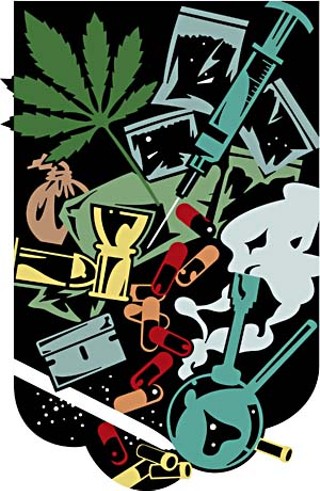 1) DON'T BOGART THAT JOINT The National Institute on Drug Abuse announced in December that teen use of marijuana increased in 2010. Federal drug warriors blame it on the spread of medical marijuana and campaigns to legalize and tax pot; the natural ebb and flow of drug popularity seems far more likely.

2) ARIZONA INHALES FOR HEALTH Copper State voters have made Arizona the nation's 15th state to approve medical marijuana for qualified patients. It wasn't until mid-November that all the ballots were counted and the Proposition 203 supporters claimed a narrow victory.

3) GOLDEN STATE DOESN'T California voters defeated Prop. 19 – the proposal to legalize, regulate, and tax marijuana for adult use – by a surprising seven percentage points. Better luck next time – and there will be a next time.

4) NELSON POPPED In November, Texas music legend Willie Nelson was busted for possession of 6 ounces of pot after his bus was searched at the Sierra Blanca, Texas, border check. Defense lawyer Dick DeGuerin, who commented to Rolling Stone on the case but did not represent Nelson, says this "illegal immigrations checkpoint" is famous for questionable searches on everything but immigration: We don't think they'll get commendations for this one.

5) KEEPING PRISONS BUSY After nearly 25 years, federal lawmakers finally undid the 100-to-1 sentencing disparity between crack and powder cocaine and the mandatory minimum for simple possession of crack. Lawmakers rejected parity in favor of maintaining an 18-to-1 disparity – regardless of the fact that the two drugs are chemically identical – and have yet to do anything to make the changes retroactive.

7) COLLATERAL DAMAGE For the second year in a row, efforts by El Paso Council Member Beto O'Rourke to officially denounce the drug war were struck from a city resolution in support of El Paso's beleaguered sister city, Ciudad Juárez. O'Rourke pushed for discussion of legalization of marijuana, thus far with no luck. Meanwhile, at least twice this year, bullets fired during drug-related Juárez altercations struck buildings in El Paso.

8) LEONHART ROLLS HER OWN Lawmakers are close to confirming the DEA's longtime acting head, Michele Leonhart, as its new full-time top narc, despite her apparent disregard for an Obama administration mandate to back off from raiding medi-pot patients who are using under state law – so look for more of the same next year.

9) BANNING NOT-POT The DEA flexed its emergency authority in December with a temporary ban on the sale of synthetic pot, sold under the brand names K2 and Spice and made of herbs laced with compounds that mimic marijuana. Twelve states have already banned the substance, claiming that it is more dangerous than marijuana – the scientific jury is still out on that – and Texas Sen. Florence Shapiro, R-Plano, has vowed to fight for a ban here.

10) DON'T SMOKE THAT DRYWALL The nation's first house constructed primarily from hemp-containing building materials was finished in Asheville, N.C., despite the fact that lawmakers have yet to reauthorize American hemp production – all hemp products manufactured and sold in the U.S. must be made from imported hemp. The U.S. remains the only industrial nation without an established hemp crop.