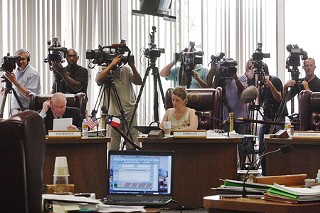 The Texas chapters of NAACP and LULAC charge that curriculum changes approved by the State Board of Education (above) last spring "negatively impact all students" but cause greater harm to minority students. (Photo by Jana Birchum)

On Dec. 19, the Texas State Conference of the National Association for the Advance­ment of Colored People and the Texas League of United Latin American Citizens submitted a request for "compliance review" to the Office for Civil Rights of the U.S. Department of Education. The submittal, signed by Gary Bledsoe, president of the Texas NAACP, and Joey D. Cardenas Jr., director of Texas LULAC, asks that the DOE review the recent social studies curriculum revisions of the State Board of Education, in light of the civil rights groups' "understanding and conclusions" that the state of Texas, the Texas Education Agency, and the SBOE have "violated or will violate" Title VI of the U.S. Civil Rights Act, which prohibits racial discrimination in federally supported programs. The document, submitted by the two organizations and supported by SBOE members Mavis Knight and Lawrence Allen, charges that the curriculum changes "negatively impact all students, but [do] disparately greater harm [to] minority students."

In addition to its detailed arguments on these complaints, the submittal may well call into question the persistent use of "minority" to describe African-American and Latino students in Texas public schools. The TEA's figures reflect that in 2008 and 2009, Hispanics comprised 47.9% and African-Americans 14.1% of the state's public school students, or 62% in all – perhaps future complaints should argue that the state is effectively discriminating against the majority of Texas students. (Ten of the 15 SBOE members are white; the complaint also notes that most of the curriculum changes were opposed by the minority members.)

Last spring's SBOE curriculum changes were the subject of much controversy at the time, with critics noting in particular the board's attempts to diminish mentions of Thomas Jefferson, deny any constitutional separation of church and state, reject textbooks deemed favorable to Islam, and so on. The letter from Bledsoe and Cardenas makes the more specific case that the curriculum changes, in concert with other practices common in Texas schools, have a disproportionately negative effect on minority schoolchildren, and that these effects are intentional. "It is our contention that the SBOE curriculum changes were made with the intention to discriminate, and that the SBOE curriculum and other areas raised in this complaint were either the result of unnecessary policies that have a disparate or stigmatizing impact on African-Americans and Latinos, or reflect disparate treatment or neglect."

The complaint letter argues that the new curriculum standards for American history greatly underemphasize the historical importance of slavery and discrimination in creating the contemporary U.S. social structure and misrepresent the history of the civil rights movement such that "white benevolence" rather than minority citizen action is seen as leading to social progress for minority citizens. The curriculum, argues the complaint, defends slavery and the Confederacy, de-emphasizes both African-American suffering and resistance to oppression, and overall marginalizes African-Americans and Hispanics "to omit teaching controversial lessons on racial violence."

The complaint provides substantial supporting scholarly materials on the premise that the "miseducation" of Texas students will serve to reinforce unequal and unjust social relations. It quotes Pro­fes­sor Juliet E.K. Walker of the UT-Austin Department of History: "It is unconscionable that a limited number of people have seized a virtual irrefutable power to dictate what information should be included or excluded in the social sciences, particularly the historic past."

Beyond the arguments concerning the curriculum changes, other charges cited in the letter include: 1) discriminatory funding of high-minority-student-population schools; 2) discriminatory access to gifted and talented programs; 3) "gross underfunding" of charter schools with large numbers of African-Ameri­can students; 4) disproportionate and unjustifiably greater discipline of minority students; 5) structural discrimination in the use of accountability standards.

The Bledsoe/Cardenas complaint asks that the civil rights compliance review be expedited and litigation or other action taken to rectify any discrimination confirmed. Specif­ically, it asks that any inaccurate or discriminatory curriculum and testing standards be stopped from implementation, and further that the state should "adopt a plan immediately to correct the problems with miseducation."

A spokeswoman for the TEA said the agency has not received a copy of the complaint and declined to comment, but SBOE member David Bradley told the Houston Chronicle that the board had "significantly increased" the inclusion of minority figures in its curriculum changes, adding: "These activists are never satisfied, and their whining to the federal government is silly and without merit."

state board of education, NAACP, LULAC