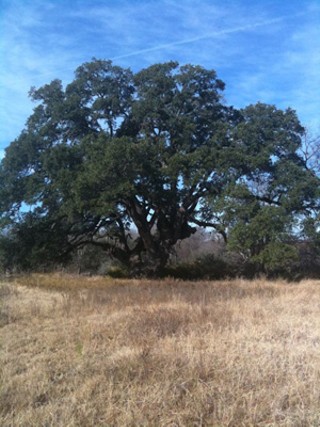 This is one of several amazing old-growth live oaks at Guerrero Park that opponents fear would be damaged by flying discs if the city carries out its plans to create a disc golf course on this site. (Courtesy of Stefan Wray)

Originally, the latest Austin battle over public spaces was between disc golfers and the city's Parks and Recreation Department. Now, the golfers and PARD have become uneasy allies fending off opposition from Southeast Austin neighborhood activists.

PARD announced back in the summer that it would close the Pease Park disc golf course at the end of this year to help that venerable greenbelt along Shoal Creek recover from overuse (see "No Disc, No Pease," June 18). The move brought howls from golfers, despite the city's promise to build a new course at Roy G. Guerrero Colorado River Park, on a tract of land purchased for almost $4 million in 2007. The city's other four courses are overused, said the golfers, and disc golf should be played in both parks.

But some neighbors of Guerrero worry that plans to put disc golf there will ruin a nearly pristine piece of land with the same sort of environmental damage that occurred at Pease, so they're trying to rally with others in the area to stop the project. PARD's current plans call for installation of the course to begin in spring and be completed by summer, pending a change of the property's zoning from mixed-use commercial to public parkland.

Pam Thompson and Stefan Wray recently led this reporter, City Council Member Chris Riley, and a handful of others on a tour of the property proposed for the course to show us the reason for their objections: several absolutely amazing, old-growth live oaks and other species they fear would be damaged, plus what appears to be a spring feeding a creek. Thompson and Wray might be described as "tree-huggers," except they couldn't possibly get their arms around these specimens, which are well over 100 years old and clearly qualify for protection under the city's Heritage Tree Ordinance. Though it's in the midst of residential neighborhoods, the property is largely unspoiled, except for some evidence of drinking and homeless camping.

"You can see why we're worried," said Wray. He and Thompson, who are not disc golfers, are especially concerned about strategies of "banking" discs off trees to reach holes at difficult angles. (Discs also accidentally hit trees in the normal course of play.) "This land is much better suited to be a nature preserve than a disc golf course," Wray said in an e-mail inviting Montopolis neighbors to tour the property with him Jan. 2.

Wray, Thompson, and other Eastsiders complained about the proposal to City Council on Dec. 16 and claim PARD didn't solicit enough neighborhood input and is not respecting the Montopolis neighborhood plan. "The blueprint for the development of the park was created in 2000 by representatives of surrounding neighborhoods on both sides of the river, PODER [People Organized in Defense of Earth and Her Resources, an Eastside environmental justice group], and the Austin Parks Foundation, and is an expression of the Colorado River Park's unique standing in the parks system," Daniel Llanes of the River Bluff neighborhood told council. (As noted, most of the parcel proposed for the course wasn't added until 2007.) "It is the only park that has a combined park and preserve designation. ... The park is designed to be the least disruptive to natural habitat. That is how we designed it."

The city wants to build a disc golf course on 35 acres along the southern edge of the Roy G. Guerrero Colorado River Park – including a 26-acre tract of land the city purchased in 2007.

Llanes said the property is home to seasonal bird nesting and species of flora previously thought to be extinct in Travis County. "It's the only urban park that offers the experience of and protects the natural wildlife and habitat by design," Llanes said. "This be-comes an opportunity for us in East Austin to use this park for environmental education in the urban setting. If it tore up Pease Park, then why should we want it to tear up Colorado River Park?" he added.

Gordon Maxim-Kelley, president of the Waterloo Disc Golf Club, rejects that characterization. "I know a lot of the activists say nobody they know plays disc golf," he says. "[They say,] 'Nobody who lives over here plays disc golf.' That's just not so. There are a lot of disc golfers who live in East Austin. And when they want to play, what do they have to do? They have to drive to West Austin to play.

"By putting a course there, it provides the disc golfers that already live there a place close to home to play," he added. Noting that golf discs are cheap and courses don't charge fees like traditional golf, Maxim-Kelley said, "It provides all the people who live around there a great, family affordable sport that they can now get involved in that they don't have to pay an arm and a leg to play."

Maxim-Kelley said trees make an important part of the course, but as obstacles to avoid, not to hit. He acknowledged the damage caused at Pease but pointed to the city's Circle C course as an example of how the disc golf community has learned how to properly maintain a facility and sustain it. "Where we have the advantage at Guerrero is, we now know all this on the front end, and the entire course can be designed to be very sustainable, very environmentally friendly, minimum impact," he said.

PARD Parks Development Coordinator Marty Stump agrees and contends that the land "would probably never be designated as a true preserve area because it has a higher and better role to serve in terms of active recreation use. We would not put a fence up around it and keep people out."

"Certainly there are members of the local neighborhood who are opposed to disc golf there," said Stump. "But the thing we continue to remind these people is that Roy G. Guer­rero Colorado River Park is a metropolitan park, and as such, it serves the entire city. It is not a neighborhood park." Both Maxim-Kelley and Stump insist the sport's increasing popularity requires more courses to prevent overstressing the existing ones.

Council members Riley and Laura Morri­son expressed reservations about how the process is playing out. "One of the things that concerns me most about this issue is the disconnect between departments," Morrison said at the Dec. 16 meeting, hinting she might use the zoning approval to slow things down. "We have a neighborhood plan that this is going to require an amendment. ... I fully understand that we have a need for more disc golf, and we've made a commitment to more disc golf, but I think making sure we get this right is very important, and I have a lot of discomfort with where we are now."

Wray plans to show neighbors around the property on Sunday, Jan. 2, at 11am, beginning at 700 Grove Blvd.

Day Trips: Camp Terralak, San Marcos
New private campground takes the roughing it out of camping but leaves the fun Headlines
News of the week, short and sweet