Tweet
print
write a letter
On Tuesday, the fifth and final candidate for the city's chief animal services officer position, Abigail Smith, faced the firing squad that is the Austin animal-rights community and lived to tell the tale. It probably helped that Smith has nearly four years' experience running a "no-kill" animal shelter. Remember, in March, animal rights activists convinced City Council to approve an ordinance making Austin a no-kill city and directing staff to figure out how to make that happen by September 2011. Asked on Tuesday how she would manage the task if she were shelter director, Smith said she'd do exactly what she's done at the Tompkins County SPCA in Ithaca, N.Y., since 2007 – improve programming for volunteers, foster-homes, off-site adoptions, and spay/neuter surgeries – but on a larger scale. Make that a much larger scale, actually: At last count, Tompkins County had a population of 102,000. Austin? Nearly 800,000. In 2009, the Town Lake Animal Center took in about 23,000 animals. Tompkins? Just shy of 3,000. In other words, if Smith does get the job, she's going to have to shake off some of her small-town sensibilities in order to survive. In her closing statement Tuesday, Smith displayed the slightest hint of provincial naivete, saying that she was hoping to convince the various animal groups in Austin to "work together" in a "coordinated, collaborated effort" to reach the city's no-kill goals. Anyone who has paid attention to animal issues these last few years knows that fulfilling such a wish will probably take a Christmas miracle. Assistant City Manager Bert Lumbreras is expected to make a recommendation to City Manager Marc Ott after reviewing the candidates' applications; no timeline is set for a final decision. 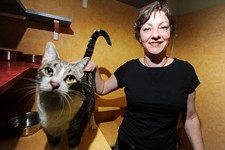