Medicaid and the Lege: Throw 'Em in the Street?

'Dropping out of Medicaid' may not be so easy for Texas 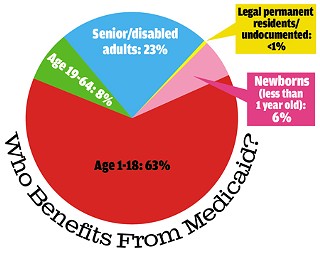 In 2009, Texas Medicaid and the companion Children's Health Insurance Program provided health insurance and long-term care for an average of 3.3 million Texas residents. The program only covers children, caregivers of eligible children, pregnant women, and people older than 65 or with disabilities. Enrollment eligibility for both programs is also tied to income.

In the fires of the fall election campaign, no single topic blazed hotter than health care, as Republicans stoked voter fury with talk of "death panels" and "Obamacare." Now, Texas Republicans are backing away from rhetoric about dumping Medicaid as a new state report finds that leaving it would cost the state far more to do far less.

In 2009, the Legislature requested that the Texas Health and Human Services Commission and the Texas Department of Insurance issue a report on the benefits and perils of quitting Medicaid. That report, "Impact on Texas If Medicaid Is Elim­in­ated," was released on Dec. 3. If hardcore conservatives were hoping it would provide ammunition for their campaign against the Health Care and Educa­tion Reconciliation Act of 2010 (aka federal health care reform), they quickly found it was shooting blanks. On average per month in 2009, 3.3 million Texans relied on Medicaid for health insurance or long-term care, while another 450,000 used the companion Children's Health Insurance Program. Texas already leads the nation in uninsured citizens; if it drops Medicaid, the authors warned, 2.6 million of those Medicaid and CHIP recipients could find themselves uninsured. That's another 2.6 million Texans faced with an impossible decision: go to the doctor and risk a crippling bill, or don't go and risk their health. The report also found that, contrary to some anti-immigrant rhetoric, Medicaid is not being swamped by undocumented foreigners. While immigrants are three times more likely than Texas citizens to be uninsured, they only accounted for less than 1% of 2009 Medicaid recipients.

The report further confirmed that while the state would gain more flexibility in how it spends its own cash, it would lose billions in federal reimbursements. In turn, patients no longer covered by Medicaid would turn to emergency rooms as their primary health care. Not only would Texas lose the additional $2.3 billion it receives from the feds as Medicaid providers to cover that uncompensated health care, but the counties mandated to provide these services would bear another $4 billion a year in costs.

Anne Dunkelberg, associate director of the Center for Public Policy Priorities, said that if conservatives try to claim that ending Medicaid makes financial sense, "The math doesn't work at all." Although the state Medicaid budget is expected to reach $30 billion in 2011, 60% of those costs will be reimbursed by the federal government. If Texas instead goes its own way, it would still have to pay for residential care for the elderly and people with disabilities out of the overstretched general revenue budget. Dunkel­berg described the anti-Medic­aid offensive as just "a new wrinkle in resistance" to health care reform rather than a movement grounded in fiscal responsibility.

Much of that resistance has been based on a brief 2009 paper, "Medicaid Meltdown," by conservative think tank the Heritage Foundation. Its authors claimed that killing Medicaid would save states a trillion dollars over the next decade. Against that background, regular Heritage Foun­da­tion speaker Gov. Rick Perry infamously called Medicaid a Ponzi scheme "that would make Mr. Ponzi feel bad." However, shortly after the release of the Health and Human Services report, Perry issued a statement saying his interest was simply in "increasing flexibility and innovation in Medicaid." Rep. Garnet Coleman, D-Houston, fired back that the report demonstrated that GOP schemes to cut Medicaid would be a "fool's errand [that would] hurt our elderly, disabled, and low-income children."

However, the possibility remains that any upcoming clash on the legislative floor may not be between Democrats and Republicans, but between senior legislators and a freshman class of conservative ideologues. The first indication of this shift may have come at a Dec. 3 freshman orientation event, when a panel including House Public Health Committee Chair Lois Kolkhorst, R-Brenham, and Senate Higher Education Committee Chair Judith Zaffirini, D-Laredo, taught new lawmakers Medicaid 101. In this state, Medicaid only covers children, pregnant women, people 65 and older, people with disabilities, and low-income families with children. In 2007, 70% of Medicaid recipients were children. It also covers 48% of all nursing home care costs and pays for the majority of school nurses and graduate medical training positions.

With those facts on the table, Kolkhorst and Zaffirini hinted at common ground that could appeal to Democratic fears about Big Pharma's powerful role in health care spending while appeasing Republican demands for increased self-reliance. The most pressing health care issues, Zaffirini noted, are not how much money is being spent, but where. Tackling childhood obesity through nutritional education may cost more in the short term, but it's the same kind of trade-off as childhood inoculation; that is, it's better to spend the money on immunization now than face an epidemic later. However, as HHS Executive Commis­sion­er Thomas Suehs told the freshmen, "The Legislature tends not to want to fund preventative programs." Again, that's where political dogma may cripple common sense and consensus. "If we propose mandating the teaching of nutrition in medical school," said Zaffirini, "people say we're micromanaging."

Kolkhorst says the idea of dropping out of Medicaid is still not off the table. With a $20 billion to $28 billion projected deficit, legislators will have to look at every state agency and program. Addressing the current political reality, Kolk­horst continued, "We have a very large freshmen class that won in a sweeping manner on mostly bashing the Obama administration and the health care bill." Combine that with the deficit forecast, and it seems inevitable that some form of Medicaid legislation will reach the floor this session. There's a steep learning curve ahead for the dogmatists. "Much of our constituency is demanding, 'Cut expenses, cut expenses, cut expenses,'" Kolkhorst said, "and then when we do it, they really meant, 'Cut everything, but don't cut my program.'" She warned: "If we opt out of Medicaid, we opt out of all of those programs. We couldn't cherry-pick."

Voter education on that point is already proceeding. On Nov. 20, House Appropri­a­tions Committee Chair Jim Pitts, R-Waxa­ha­chie, told an Ellis County tea party meeting that if Medicaid goes, "We will have to throw some people out in the street." Rep. Donna Howard, D-Austin, called Pitts a "very honest broker" on the issue but feared how unreceptive health care reform opponents may be. A former critical care nurse, Howard said, "I'm still hearing from some people that everyone should be able to take care of themselves, and that if we didn't provide health care that they would be taken care of by the philanthropic and faith communities."