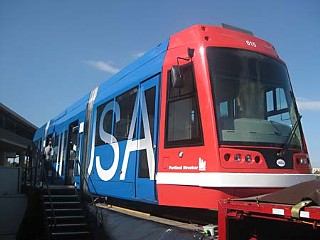 Just imagine Austin with urban rail, like Portland's spiffy 66-footer that made a brief stop at the Palmer Events Center on Monday. What a tease! The rail car's appearance here also served as a vehicle for city officials to begin crafting a rail campaign message to take to voters in 2012. (Photo by Lee Nichols)

It will come as no surprise to Austinites that former GOP congressional honcho (and now convicted felon) Tom DeLay can't even take a piss without bragging. Last week, after lengthy closing arguments (prolonged by technical glitches with recordings) kept everybody in Judge Pat Priest's courtroom for several hours, DeLay uncharacteristically bolted past a crowd of reporters in the hallway on his way to the bathroom. Finally exhaling over the urinal, he responded to a neighboring refugee's offhand remark, "That was a long time to hold it," with: "Exactly – lucky I have a politician's bladder." That excess capacity may serve the Hammer well if he eventually takes up residence in TDCJ. – Michael King 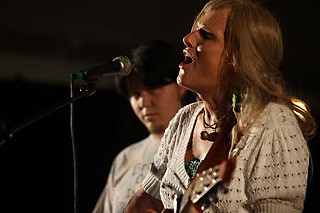 City Manager Marc Ott has selected four finalists from which he'll choose the city's next police monitor. Ott whittled the field down from 66 applicants to the current four: former Travis County Sheriff Margo Frasier, current Assistant Police Monitor Renita Sanders, Austin attorney Ann del Llano, and Cristina Beamud, currently the director of the Atlanta Citizen Review Board. The next monitor, the city's fourth, will take over for outgoing Police Monitor Cliff Brown, who won the race to be the next judge on the felony 147th District Court. Ott will make his final pick after two public meet-and-greets, on Tuesday, Dec. 7, at 3pm and 6pm, at the Millennium Youth Entertainment Complex, 1156 Hargrave. – Jordan Smith

Personnel issues have erupted again at the Austin Fire Department, as an arbitrator has overruled Chief Rhoda Mae Kerr's decision to pass over a captain for promotion. In a decision last week, hearing examiner Chuck Miller wrote that Kerr's reasons for bypassing Capt. Guy Groomer for promotion don't constitute a "valid reason" in civil code. In 2005, Groomer was demoted after being busted for shoplifting; this spring, when he became eligible for promotion after two battalion chief positions opened up, Kerr didn't tap him, instead citing among her reasons Groomer's "unscrupulous conduct." Calling Groomer's previous troubles "ancient," Miller wrote that the "newly determined ultra serious nature" of Groomer's past transgressions was "the result of a newly subjective philosophy on the part of the chief." – Wells Dunbar

Imprisoned polygamist prophet Warren Jeffs is back in Texas after the Utah Supreme Court declined to step in and block his extradition. Jeffs, leader of the Mormon breakaway sect the Fundamentalist Church of Jesus Christ of Latter-Day Saints, was convicted in Utah in 2007 on charges of rape-as-accomplice for marrying an underage church member to her adult cousin. Those convictions were overturned this year after the Utah Supremes found that Jeffs' trial judge had provided an incorrect jury instruction. The state can retry Jeffs but to date has made no move to do so. The delay led Jeffs to challenge his extradition to Texas, where he faces more serious felony charges – including sexual assault and bigamy – leveled after the infamous 2008 raid by state police and child protection workers on the FLDS compound outside Eldorado. Moving Jeffs to stand trial in Texas would violate his right to a speedy retrial in Utah, he argued, but the Supremes rejected his appeal in a two-sentence ruling, setting the stage for his extradition. His attorney, Wally Budgen, told Reuters that since the court declined to force prosecutors' hands on the retrial, he'll seek dismissal of the Utah charges. "By sending him to Texas without finishing what they started, they've deprived him of his right to a speedy trial," he said. "And as a matter of Constitutional law, when he is returned to Utah, we'll file a motion to dismiss and that motion will be granted." – J.S.