Austin altruism in danger of homelessness once again

Tweet
print
write a letter
The holiday season is the time when we think of our fellow man, especially of the less fortunate.

And of keeping them as far away from us as possible.

Okay, so that's overselling it a bit. But in our homeowner/neighborhood association-dominated body politic, every card-carrying member of the Republic of Austin's liberal congregation wants to do something about homelessness – but how? And more importantly, where?

The issue has arisen again with the re-emergence of Mobile Loaves & Fishes' proposal for an RV park to permanently house members of Austin's population of "chronically homeless" – those who have been on the streets for an extended period of time or homeless in several separate instances. Fanning the flames is a recent Statesman report highlighting two city-owned sites deemed worthy of further scrutiny for the project: 23.5 acres of land at Burnet Road and Braker Lane and 1,250 acres spread across 22 parcels at FM 973 and Platt Lane, just northeast of Austin-Bergstrom International Airport and near the Hornsby Bend Biosolids Management Plant.

Just why the sites are receiving the banner treatment now – more than two months after first being floated in a September memo to City Council – is anyone's guess. It unfortunately represents another instance of the city being caught flatfooted by neighborhood opposition. But the question is: Are neighbors overreacting to a trial-balloon that is so far just half-inflated? Or has the city fouled up – again – by crafting plans before it gets any outside input?

"Simply because word got out we were vetting these two sites, you have all these small-business and neighborhood coalitions saying, 'Don't event think of it,'" says Mayor Pro Tem Mike Martinez, who has morphed into the de facto council frontman for the project, beginning with his early public support for this "habitat on wheels," which was already shunted from its original proposed location off Ed Bluestein due to – you guessed it – hood oppo. "By no means has any decision been made, and I don't know of any time frame for a decision to be made," he says.

Regarding Mobile Loaves, the only time frame on the horizon is one of council's own making: its edict, earlier this year, that the city prioritize remaining bond money for affordable housing into permanent supportive housing for the chronically homeless, or those at risk of homelessness (surviving on 30% of median family income or less). The sentiment is an outgrowth of the national "housing first" movement: the revolutionary concept that whatever issues homeless people face – substance abuse, domestic violence, mental disorders – can be better addressed if they don't spend the day wondering where they'll sleep that night. (Crazy, we know.) The not-inconsiderable investment the city needs to make – some $9 million, for starters (but leveraged 4-to-1 by federal bucks) – is expected to be recouped in fewer police calls, emergency room visits, hospital stays, and jail bids.

So the city is starting to scramble to hit its first benchmark: creating some 350 permanent supportive housing units in four years, with an end goal of creating 1,900 total. So while the Mobile Loaves proposal is still raising ire (that combination of "trailer park" and "homeless" just makes people's teeth itch), it's nowhere near actually ready.

Meanwhile, drawing far less attention is a proposal placing PSH units in central East Austin – and council is supposed to vote on that funding next week.

The Marshall Arms apartments are an admittedly grimy complex on East 12th. Under a proposal slated for council consideration Dec. 9, Summit Housing Part­ners and local social service org Caritas would buy and rehabilitate the 100-unit property, receiving city assistance for reserving 20 units for PSH, complete with "wrap-around" social services for those inhabitants.

Opinion on the project is definitely mixed. Adamantly opposed are Robertson Hill and Swede Hill neighborhood associations, which point to the complex's proximity to the open-air drug market at 12th and Chicon as problematic for PSH residents. They tried to make that case to the Urban Renewal Board at a recent special-called meeting on the project, but their hope of blocking PSH uses by changing the Urban Renewal Plan – which governs redevelopment of the area – was essentially rejected.

On the other hand, Kealing Neighborhood Association Prez Rick Cofer has voiced tentative support for the project and essentially, by its acquiescence, so has council. "I don't understand the arguments of folks saying we want to keep this old, blighted apartment complex where low-income residents reside, instead of a refurbished one offering wrap-around services," says Martinez.

Looking back on the city's unsuccessful, piecemeal approach to homelessness – a loitering ban here, a panhandling prohibition there – Martinez says, "Honestly, on things like outlawing panhandling, we'd actually be able to have a fruitful conversation about those issues if we devoted land and effort to get folks off the street."

But in a politically perilous situation like Marshall Arms – where there's practically no upside to protracted debate – are we willing to make that effort?

Keep the conversation going with the Hustle on Twitter (@CityHallHustle) and at www.facebook.com/cityhallhustle. 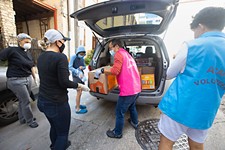 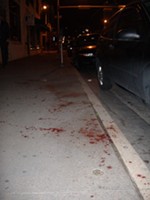 Crime and the City Solution
Do you know who's killing Austin's golden goose?