Council considers handing over remaining Water Treatment Plant No. 4 funds all at once 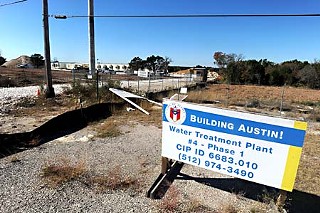 As City Council moves to consider fast-tracking the funds to pay for Water Treatment Plant No. 4 at this week's meeting (Nov. 18), construction on the facility is already well under way at the Lake Travis site, near the intersection of RR 620 and RR 2222 in northwest Austin. (Photo by John Anderson)

Opponents of Water Treatment Plant No. 4 are facing high tide, as the city is opening a floodgate of funds to the controversial plant and voting on a critical plant component.

This Thursday, Nov. 18, City Council will vote on whether to allocate $300 million in building funds – the remainder of the $359 million total due – to construction manager MWH Constructors in one fell swoop (Item 5). The move stands in contrast to how WTP4 funds have previously been awarded, with smaller contracts for individual services awarded as they came up, providing more information on construction – and more opportunities for protest. 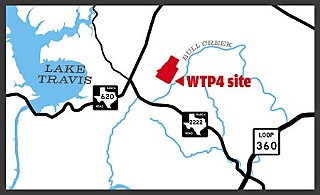 The usual suspects stand opposed to the allocation: Save Our Springs Alliance, the Austin Sierra Club, and other environmentalists concerned about the ecological impact, cost, and growth-promoting power of the plant, designed for an ultimate processing power of 300 million gallons a day. However, they were bolstered in their opposition last week by the Water and Waste­water Commission, which voted against recommending the one-time money dump.

Austin Water Director Greg Meszaros argued that by abandoning artificial timelines tied to council and boards and commissions action, the allocation would allow greater adaptability and possibly lower construction prices, allowing the contractor "increased flexibility in responding to requests from prospective [subcontracting] bidders." The Water and Wastewater Commission disagreed, voting 4-1, with one abstention, against the full allocation. However, the commission's recommendation has no binding power, and the council thus far has held steadily 4-3 in favor of WTP4 construction. Were the item not to pass, Austin Water would likely continue with its contract-by-contract approach.

In addition to the omnibus allotment, council takes up a separate, $23.5 million contract with MWH for additional WTP4 site work (Item 4). Also, council is scheduled to set a Dec. 16 hearing and vote on whether to appropriate parkland facing several homes in Northwest Austin for a shaft needed to build one of WTP4's underground water mains (Item 66).

Neighbors along Spicewood Springs Road have organized in opposition to the shaft and the staging, fearing repeated truck trips and construction noise. The city has scaled back its plans for the site, changing it from a "working" shaft to a "retrieval" shaft, which officials say will reduce traffic and construction days. But opponents haven't budged. So far, they have staked their hopes on the city's "Section 26 hearing." Texas Parks and Wildlife Code, Section 26, states that parkland can only be taken for nonrecreational purposes if no "feasible and prudent alternative" exists – a case neighbors will no doubt try to make Dec. 16, at City Council's final meeting of the year.