On the Lege: House GOP Goes to War – With Itself

Even in victory, Republicans are divided 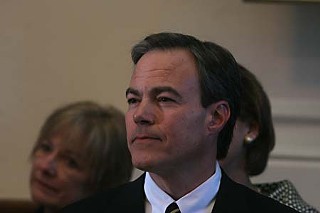 On election night, the 51 remaining House Democrats in the Texas Legislature feared that the new majority of 99 Republicans would be able to steamroll through any policy they wanted. But instead of fleshing out its legislative agenda, the GOP is embroiled in a war over the fate of Speaker Joe Straus, and party leaders are still debating what their dominating victory on Nov. 2 really meant.

The exact makeup of the House is still in flux. There are already 10 contenders to fill the Seguin seat left vacant by Republican Rep. Edmund Kuempel's death on Nov. 4: That's seven Republicans, two Democrats, and a Libertarian in a Dec. 14 special election for a seat that hasn't seen a competitive race in decades. Meanwhile in Travis County, Republican Dan Neil trails Democratic Rep. Donna Howard by just 16 votes and has until two days after the secretary of state canvasses the final results – scheduled for Nov. 22 – to seek a recount. For Howard it's still business as usual. "I've not heard anything from Dan Neil or his campaign, so we're just plugging along, doing our work."

When those two seats are settled, the first order of business for the new session will be selecting the new speaker. San Antonio Repub­lican Straus announced his intention to run again before the end of the last session. It was broadly expected that he would face a conservative challenger, especially since his power base was weakened. Of the leading GOPers who helped him defeat previous Speaker Tom Craddick – nicknamed the Gang of 11 – four of his key lieutenants are gone: Kuem­pel died; Brian McCall, R-Plano, left to become chancellor of Texas State University; and Tommy Merritt, R-Longview, and Delwin Jones, R-Lubbock, were knocked out by primary challengers. More damagingly, many of the Demo­crats who formed the backbone of his support are gone, swept away in the election.

Veteran conservative Rep. Warren Chis­um, R-Pampa, jumped the gun by announcing on Oct. 13 that he would challenge Straus. Burnishing his own experience, Chisum announced, "Straus has never served on Approp­ri­a­tions, never served on Ways and Means, has never even faced a difficult budget cycle, much less served as a member during a redistricting session." Then Rep. Ken Paxton, R-McKinney, unexpectedly joined the race on Nov. 11. He told his fellow members that Texas voters "expect us to use this mandate to honestly advance conservative principles and not simply protect the status quo. These goals can only be accomplished with a conservative Speaker." So far, he's picked up backing from the Young Conservatives of Texas, the Republican Liberty Caucus, and former U.S. House Speaker-turned-tea party sugar daddy Dick Armey. However, there's less excitement about Pax­ton's candidacy on the floor. He has two GOP supporters, who both happen to be his neighbors: his fellow Collin County Rep. Jodie Laubenberg and Denton County's Tan Parker.

Paxton-backer Parker sits on the House Republican Caucus Executive Committee, which held a straw poll of members on Nov. 15 to see whether the Republican caucus backed selecting the speaker and presenting the chosen one as a fait accompli to the Democrats. Rep. Patricia Harless, R-Spring, has already warned that such a poll could violate the Texas Constitution. Howard said, "It's a lot of maneuvering right now, with no real way to know what the outcome will be."

Yet those maneuvers have some worrying undercurrents. When Chisum compared Straus, who is Jewish, to Pharaoh by saying, "Let our people go," his comments seemed simply tone-deaf. More worrying are the blatantly anti-Semitic anonymous mailers and e-mails, including one that said "Straus is going down in Jesus' name."

But Straus may prove difficult to dislodge. In 2008, the 74 Democrats threw themselves behind him as the most moderate and process-based contender. In 2010, 49 of the survivors have pledged themselves to the incumbent. Even with the handful of defections, Straus still has 75 Republicans on his pledge list, and his candidacy got an extra boost on Nov. 12 with a letter of support from the Republican committee chairs. Among the signatories are a number of more moderate Republican incumbents such as Todd Smith of Bedford and Vicki Truitt of Southlake, who faced vicious primary challenges from the conservative wing.

So much may ride on the large freshman class of GOPers, buoyed by a conservative wave that could quickly ebb. A new report by the Austin Community College District's Center for Public Policy and Political Studies shows straight-ticket voting at a 12-year high in gubernatorial races. The long-predicted anti-incumbency wave flowed toward the GOP, with Republicans taking 57% of straight-ticket votes. While established electoral wisdom holds that it's tough to dislodge any incumbent, the new kids on the floor will have to establish themselves as individually re-electable.

With a 99-seat majority, the Republican caucus in the Legislature now finds itself in the same position as Dems were in 2008 when they took Congress: caught between a fired-up base eager for reform and a volatile electorate prone to buyer's remorse. On Nov. 9, Rep. Fred Brown, R-Bryan, told his fellow members in a letter: "[O]ur mandate is to restore fiscally conservative policies. There was comparatively much, much less discussion on the campaign trail about socially conservative issues." He warned, "If we overreach in the name of a mandate that may not exist, I fear for where our House Majority may be two years from now."