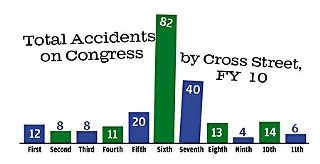 If you're a regular Downtown bus rider, you can no longer stroll up to just any corner on Congress and hop on your bus. Citing a need to improve traffic flow and cut down on vehicle accidents, Capital Metro is currently trying a pilot project that closes the northbound stops at Sixth and Seventh streets and the southbound stops at Seventh and Eighth. The project began on Nov. 6.

Of course, this means the transit agency will be closing Sixth northbound, one of the most-used bus stops in all of Downtown.

Cap Metro was already considering moving most of its bus routes off Congress anyway as part of its Service Plan 2020 recommendations, due to the slow pace at which buses move down Downtown's main street. But accidents seem to be an even bigger motivator for this project: Cap Metro says that 40% of all bus accidents occur on Congress, and of those, almost half occur at the Sixth and Seventh intersections.

"If you look at the traffic patterns on Congress going north, at 6th street cars can turn left at the light," explained Cap Metro spokeswoman Erica McKewen via e-mail. "If one of our buses is stopped at the stop there, in effect the only thru traffic lane is the middle lane. Consequently, you see cars jockeying into position leading up to that intersection, leading to more accidents and heavier/slower traffic ... When we close 6th and 7th, we expect the majority of the riders who normally board at 6th to be served at the stop on Congress at 5th. Without the left turn issue, even with our bus at the stop, there are two lanes of thru traffic. We think that will result in a better experience for everybody: faster travel time for bus riders and for other motorists and improved safety."

If data gathered shows the project a success, then Cap Metro may consider closing even more stops in its January 2011 service change, leaving only six stops total: a pair each at Cesar Chavez and Second, at Fifth and Sixth, and at 10th Street.

"During rush hour, a person often can walk down Congress Avenue faster than riding the bus," says Cap Metro CEO Linda Watson. "Coupled with the fact that way too many minor collisions involving our buses occur along Congress, it becomes obvious we need to try something different. Although riders may have to walk a bit more to get to their stops or to make their connections, the trade-off will be a faster, safer ride."