Planting a Place in the Shade

In 2007, the Lady Bird Johnson Wild­flow­er Center released an "ecological assessment" of Pease Park concluding that the park "is being loved to death." Heavy use by hikers and runners, disc golf and volleyball players, dog owners in the leash-free area, and ordinary parkgoers, the study said, had produced "significant deterioration and depletion of the landscape" including "increasing areas of bare rock and eroded, compacted soils found throughout the park." Indirect effects included "degraded wildlife habitat, less species diversity, and death or weakening of the park's mature trees with little natural regeneration of desirable plants to replace them." The result is not just a loss of natural beauty, concluded the study, but increasing deterioration of Shoal Creek as a watershed and the landscape's defenses against floods.

The Wildflower Center recommended "a sustainable restoration and management plan ... to preserve the scenic appeal of this precious slice of open space in the city center for both today's park users and those in generations to come." Specific recommendations included "soil amendments, mechanical manipulation, native plantings, as well as changes in the current use patterns of the park. ... Degradation at the park is to the point that it cannot recover without active intervention."

The report was a spur to the Parks and Recreation Department's plan, scheduled to begin major work next year, to restore Pease as the city's "Central Park." The project area will include the creek and its neighboring floodplain in the parkland just south of Gaston Avenue to 15th Street and will address the water quality in the creek, repair the substantial stream bank erosion, and restore healthy soil and vegetation, including more native species. Katherine Beisner and daughters Ruby and June pitch in at a 2009 volunteer event. (Photo by Jana Birchum)

Currently, the most visible aspect of the park's restoration is "Trees for Pease," the volunteer-based project that's a collaboration of the forestry staff of the Parks and Recreation Depart­ment, Austin Parks Foundation, and most centrally, Friends of Pease Park, one of the more than 60 volunteer groups that have adopted parks throughout the city. Members include many of the park's immediate West­side neighbors, as well as miscellaneous volunteer organizations such as Eeyore's Birthday organizers, Waterloo Disc Golf Club members, and university and community service organizations, that help whenever they can. According to APF Executive Director Charlie McCabe, the project proceeds "under the APF umbrella," where the funds raised are held in trust, then paid against PARD-approved work for planting, irrigation, and maintenance. Like many other local organizations – the Eeyore's Birthday group is a major source – APF also helps recruit volunteers for the big work days. (Planners are well aware of the importance of the annual picnic; PARD's Marty Stump reports that there is "close coordination ... right down to beer truck delivery route and turning radius.")

Friends of Pease Park founder, attorney Richard Craig, said that following the group's formation in 2008, 100 trees were planted in the first year, another 200 in 2009, and now the total is more than 350 – with about 98% of them rooted and thriving. Among the trees are 28 different species, he said, all but one (ginkgo) native to Austin. "The park was just losing its tree canopy," Craig said, "with no younger trees appearing to replace the older ones. Over time, that would mean losing all its shade; in Austin, a park losing its shade is not much use to anybody in the summer." On a walk through the park now, among hundreds of newly established young trees, it's possible to imagine in 20 years a dramatically restored canopy of summer shade. With the help of more than $125,000 in donations, turf-grass has been sodded on the big lawn near Kingsbury Street, along with an automated irrigation system. All this has been accomplished with a combination of PARD resources – from engineers to backhoes – and volunteer handiwork. "Our aim is nothing less than restoring the park to be a public space of the first class, unrivaled in Texas," reads the Trees for Pease Facebook page. "Hundreds of new trees, irrigation, grass, native wildflowers and community friendly amenities are all envisioned."

Praising the inventiveness and energy of city staff and volunteers alike, Craig described the project's recent "third phase," completing the Kingsbury streetscape, planting trees around the splash pad, and adding limestone blocks for parents to sit on while watching their kids. There's also a new roof on the Tudor cottage restroom; Craig envisions a possible refreshment booth to help raise money for the park.

One major concession to the park's fragility is the city's decision to close the popular disc golf course at the end of the year, with an expected move to Roy G. Guerrero Park or another prepared space, in the short term for the creek restoration, and more permanently because the intensive use is simply too hard on Pease's fairly restricted land, trees, and creek banks. Craig praises the golfers' engagement with the park and their help in the restoration but says the park and creek simply can't sustain the heavy impact. "I always say you could have a golf course that had a herd of elephants run over it every day – if you threw enough money at it, as they do at a country club. The city just doesn't have the money for that kind of intensive maintenance."

Craig hopes the Trees for Pease project will be synergistic for more projects, including additional tree plantings and perhaps a more permanent nature trail – and that it will inspire similar projects elsewhere in Austin. "Austin prides itself on being such a green city," Craig said. "We're a little bit smug about it to some degree, and so we don't put the money and work into maintaining it, like some other cities that might not be naturally endowed with these features. There's no free lunch. If we don't take care of our environment and maintain it, we could look up one day and find we've lost the natural beauty that we've taken for granted." 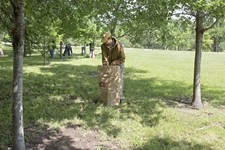 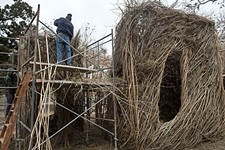