Tweet
print
write a letter
• City Council is off this week, but we sort through its recent actions requiring citywide recycling (see "City Expands Recycling Reach") and council's consideration of a new Convention Center hotel (see "City Hall Hustle"). Council next convenes Nov. 18, for its third-to-last meeting of the year.

• Elections for three City Council seats are coming in May 2011: Place 1 (occupied by Chris Riley), Place 3 (Randi Shade), and Place 4 (Laura Morrison). Monday, Nov. 15, is the first day candidates can file for (re)election. The biggest buzz so far holds that former state Rep. Ann Kitchen may run against Shade. Visit austinchronicle.com/newsdesk to see what develops.

• On again, off again Austin Police Department Officer Leonardo Quintana was arrested this week by Leander Police on misdemeanor domestic violence charges stemming from a 2009 incident with his then-girlfriend – the same allegations that led Chief Art Acevedo to dismiss him recently (see "Naked City").

• At press time, the Capital Metro board of directors is set to vote on several fare changes, which are widely expected to be adopted. Single bus rides and day passes stay fixed, but multiday bus passes and MetroAccess trips for riders with disabilities will rise, while MetroRail fares fall in a bid to increase ridership. 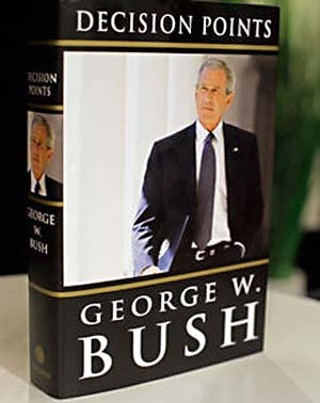 • It's the battle of the dueling book tours: Gov. Rick Perry turned up on The Daily Show on Nov. 8 to shill his new anti-D.C. tome, Fed Up!, while his gubernatorial predecessor, former President George W. Bush, went on The Today Show to pimp his apology-free autobiography, Decision Points.

• The Nov. 2 election continues. Final counts of provisional and mail-in ballots give Rep. Donna Howard, D-Austin, a 16-vote majority over Repub­lican Dan Neil that he can still challenge with a recount, while the death of Rep. Edmund Kuempel, R-Seguin, triggers a Dec. 14 special election for his seat. (See austinchronicle.com/elections for election wrap-up coverage.)

• The Travis County Democratic Party is ramping up its 2012 campaign efforts, but first it's clearing out some of its 2010 election memorabilia with a 10am coordinated campaign garage sale on Saturday, at 605 W. 13th.

• Someone's getting defriended: Facebook is being sued by Austin-based parody-site Lamebook after lawyers for the social networking giant demanded that Lamebook change its website's name. Lamebook founders argue that their First Amendment rights are being suppressed, while Facebook is counter-suing in California, claiming trademark infringement.

"A lot of good legislators won't be in Austin come January. But that pales in comparison to the loss Texas suffered ... in the passing of my friend Edmund Kuempel."