Office and multifamily complexes will have a home for paper, cans, and bottles 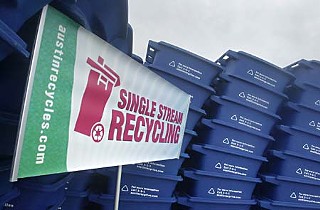 City Council took the first steps toward citywide recycling last week, approving a phase-in of recycling at apartments, condos, and offices by 2014. However, questions about cost and food-service participation in Phase 2 of the process are still being sorted through.

Solid Waste Services Director Bob Ged­ert walked council through the major provisions at last Thursday's meeting. Phase 1 of the program, which council adopted, gradually implements recycling at all multifamily residences (under old rules, only buildings with 100 or more units were required to recycle) and office buildings – some 4,600 buildings and complexes in all. "The concept is, the larger the property, the sooner the phase-in," Gedert said, with residential complexes of more than 75 units and office buildings larger than 100,000 square feet going green first, effective October 2012. Up for collection, said Gedert, are mixed paper, plastic containers, corrugated cardboard, aluminum cans, and glass – the same materials collected in SWS customers' blue recycling bins. (For more on the program basics, see "City Hall Hustle," Nov. 5.) Private haulers would handle the collections, but the city is not excluded from expanding its services to include commercial properties.

Phase 2 of the program, encompassing restaurants, bars, hotels/motels, caterers, and manufacturing/industrial facilities – some 5,600 properties – is still being sifted through, Gedert said, predicting that an ordinance will be ready for council consideration in 2011. The largest complication appears to be "organics" recycling, i.e., collecting food scraps for composting. Citing "the need to work with the health department in collecting organics in a safe and healthful manner" and "details at the collection end of each restaurant or food service entity," Gedert said Phase 2 is "not fully vetted out. There's significant concerns by the stakeholders. And so our answer to our stakeholders is, let's work those details out and come back to council next summer."

Cost was also a concern to council, with Gedert noting two different types: expenses to the providers and those to the city itself. While he noted that apartment owners were "very sincerely concerned" about the cost of offering recycling and that adding it would probably mean a "pass-along fee increase" to renters, he didn't have an estimate for them yet; Council Member Bill Spelman asked Gedert to provide cost estimate updates as soon as they're available. But to some extent, that cost is out of the city's hands, as all but the smallest complexes are slated to be served by private companies, not by SWS itself.

Mayor Lee Leffingwell honed in on the cost to the city, an estimated $525,000 in expenditures for increased staff time, education and signage, monitoring services, and a one-time $110,000 fee to develop an interactive website where haulers can record their recycling info. "Is it 3-D also?" Leffing­well asked. Gedert said the expense was typical for its type of application-based website and noted costs would start accruing not in next year's budget, but in 2012's.

Despite the financial concerns and some unresolved issues, the measure passed on a unanimous vote. While SWS doesn't yet have numbers for the total number of residential units affected – only the number of complexes – Spelman made a thumbnail sketch from the dais. Estimating some 50,000 individual units would be serviced in the first round, he said, "there are probably a couple of people in each of those units. We're talking about something like 100,000 people a year and a half from now getting access to recycling who do not have it now." 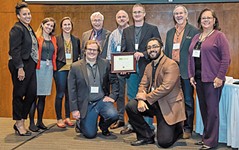 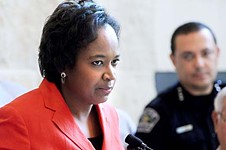