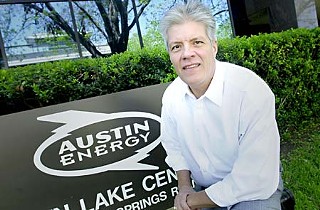 "I want to try to give people who have been good GreenChoice customers all this time ... the chance to stay on green power. But I can't blow the doors open, because it may run into other policy priorities." – Karl Rábago, Austin Energy (Photo by John Anderson)

Early adopters of Austin Energy's GreenChoice program – those who subscribed to the first two "batches" of wind power made available by the utility 10 years ago – have saved a lot of money over the years. Originally, they agreed to pay flat rates that were slightly higher than the going fuel charge paid by standard AE customers. But as the fuel charge rose, eventually surpassing the GreenChoice rates (see chart, below), those subscribers began to see savings – up to $1,485 for Batch 1 participants who signed on by Sept. 30, 2000, according to AE spokesman Carlos Cordova. The catch, of course, was that those wind contracts would someday expire – and that day is almost here.

A disconcerting letter received in recent weeks by subscribers to those first two batches begins with this sentence: "Thank you!" It then goes on to explain how those subscribers propelled the GreenChoice program to nationwide acclaim, prevented 81,000 cars' worth of greenhouse gas emissions, and "paved the way" for "an explosion of renewable energy in our state." The bad news waits down in paragraph three, in boldface for those not accustomed to reading utility company letters in their entirety: "Your contract expires on March 1, 2011." Subscribers now have two choices: They can simply allow their accounts to revert to the current, standard fuel charge of 3.65 cents per kilowatt hour – more than twice the Batch 1 price of 1.7 cents, and about a 28% hike for Batch 2 customers – or, they can sign up for Batch 6 at a whopping 5.7 cents, a 235% increase for Batch 1 customers.

Has It Been 10 Years Already?

When asked about the price jump, Karl Rábago, AE's vice president for distributed energy services, was quick to point out that the price hike affects only the fuel charge – just a portion of the utility bill – so it isn't as bad as it seems. In addition to the fuel charge (which is replaced by a GreenChoice charge for program participants), every customer also pays a "customer charge" and an "energy charge," neither of which will be affected by the GreenChoice changes. "It's not as big as tripling the [entire bill] or something like that," said Rábago.

Still, he admitted, the situation "has some wrinkles" – including the fact that the 10-year contract period seemed to pass more quickly for some (namely, Batch 2 customers who signed up after the contract period had begun) than for others. While the program officially began March 1, 2001, the sign-up period started more than a year earlier, with Batch 1 quickly selling out. Batch 2 then became available in September 2000, but it wasn't sold out until 2003, well after the 10-year contract period had begun. "The contract was always set to expire at a specific date," said Rábago. "Some people signed up right off the bat and got a full duration on it, and some people signed up later and got less. We sold the batch until the batch was sold out." (Notably, while the fuel charge was at just 1.37 cents when the first Batch 1 customers signed on, it rose to 2.68 by the time the program began, so those customers saw savings from the outset; it took Batch 2 customers a little longer to see savings.)

While GreenChoice customers' rates have remained flat (as represented by the dotted lines), the standard fuel charge paid by nonsubscribers (represented by the solid black line) has increased over time, resulting in savings for most GreenChoice subscribers. As can be seen here, by the time the GreenChoice program began in March 2001, Batch 1 customers – who had signed up the previous year, when fuel charges were lower – were already saving money.

For subscribers hoping to stick with GreenChoice, the biggest wrinkle may not be the seeming time warp or even the sticker shock so much as the briefer term of the Batch 6 subscribers' contract, which will expire in just three years. GreenChoice has typically allowed customers to hedge against rising natural gas prices – the "most volatile fuel prices in the electricity industry," said Rábago – by locking in long-term flat rates. With its 2014 expiration date, Batch 6 lacks that natural draw. Asked if he thought the fuel charge is likely to hit 5.7 cents by then, Rábago responded, "If I knew that, I'd be wealthy and not working for city wages."

AE purchased Batch 6 in December 2008, the end of a particularly rocky year for natural gas prices, which had been sky-high that summer (wind prices tend to follow natural gas). At the same time, congestion fees – charges AE must pay for overcrowded transmission lines – also appeared to be on the rise. Gas prices eventually calmed down, and when congestion worries also eased, AE actually lowered the Batch 6 price to its current rate, taking out the overhead for expected congestion costs (see "GreenChoice Affordable After All?," July 31, 2009). Still, more than a year since that price adjustment, Batch 6 is only 5% subscribed while all previous batches have sold out.

"We know we sold out of Batch 5 at 5.5 cents in [a contract of] 10 years, so I feel pretty good that we could sell out of Batch 6 if we had the same duration," said Rábago. "But I will also tell you that we have a big demand coming from the city accounts. The city is supposed to get on GreenChoice next year, so I've got to make sure I've got available supply to meet the Austin Climate Protection Plan program requirements." Right now, GreenChoice represents 20% of city of Austin energy use, said Rábago. "They're getting the advantage of that long-term stability," he said, so with the remaining city departments scheduled to come on board this year, he's considering extending the Batch 6 subscriber period so that they, too, can benefit. Asked whether he'd extend the contract term for residential subscribers as well, Rábago said: "It's in the realm of possibility. I have to look at supply and demand."

In fact, said Rábago, there's not enough supply in Batch 6 to accommodate both the city and all Batch 1 and 2 customers. "I want to try to give people who have been good GreenChoice customers all this time – our early adopters – the chance to stay on green power," he said. "But I can't blow the doors open, because it may run into other policy priorities in our city. As always, I'm trying to balance a number of competing and complicating factors."

Among those factors is the fact that AE can't plan for further major wind purchases (anything more than 10 megawatts) until the generation plan goes into full effect, which can't happen until an "affordability matrix" has been approved by council – something Rábago hopes to see in December.

Even if AE is able to make a big wind purchase in the near future, it's unclear whether there will ever be a GreenChoice Batch 7. In the summer of 2009, as AE considered adjusting the Batch 6 rate, now-retired AE General Manager Roger Duncan expressed doubts about the future of a program that attempts to separate green and brown power. "It was our intent to stimulate the market for renewables," he said at the time. "It was never intended to go on forever." Last week, when asked if AE customers will get a chance to sign up for more GreenChoice power after Batch 6 has sold out, Rábago responded, "I sure hope not." 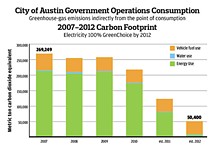 How Green Is Our Austin?
The city turns green with 100% renewable energy

What You're Paying For
A bill comparison between GreenChoicers and nonsubscribers