It was a brutal E-night for Democrats in Texas, including some in Travis County, but the toll spared judicial candidate Tim Sulak, who won a seat on the county's 353rd civil district bench with roughly 57% of the vote over GOP incumbent Jeff Rose, appointed to that seat last year by Gov. Rick Perry after the untimely death of elected Dem Judge Scott Ozmun. As it happens, Sulak and Ozmun were friends, and Sulak says he's happy to be taking over his colleague's seat – the win, he says, is meaningful in many ways. But he was sympathetic for the hits some candidates took. "It's a good night for me," Sulak said at the Travis County Demo­crats' election-watch party at the Driskill Hotel, "but it's heartbreaking in other places."

Indeed, shortly before 10pm, in a room not far from the Driskill's ballroom, Demo­crat Kurt Kuhn was on the phone conceding the 3rd Court of Appeals race to his Republican challenger, Melissa Goodwin. He wished "the best of luck to you," he told her, and for the "success of the court." The race, in the 24 Texas counties covered by the court – from Travis and Williamson, down to Caldwell, west to Irion and San Saba and over again to Milam – was a long campaign for Kuhn, who ran a bipartisan race to the finish (notably, he'd earned the high-profile support of several Republican jurists, among others), working voters for 23 months and racking up more than 45,000 miles on his car in the process. In the end, he earned just shy of 43% of the vote. While he's definitely disappointed – he was, essentially, sucked under by a Republican wave ("There's absolutely nothing we could've done about that," he said) – he was nonetheless proud of what he accomplished by sticking to his goal of running a positive and bipartisan campaign. "This was not about voters looking at individual candidates; it was an electorate upset with the party in power," he said. Regardless, he's says he ready to get back to his family, to whom he made a serious campaign promise that he intends to keep: "I said, 'Win or lose, we're going to Disney World.' So, I'm going to Disney World."

Goodwin's win means that the influential 3rd Court – which not only hears civil and criminal appeals, but also considers all appeals coming from state agencies as well as public corruption cases – will tip firmly to the GOP, a circumstance that the party has long hoped for. As it stands now, the six-judge court will have four Republicans (including the as-yet-unfilled seat vacated earlier this year by Judge Alan Waldrop who retired abruptly in midterm) and just two Dems, Chief Justice Woodie Jones and Judge Diane Henson. Goodwin said Kuhn was very "gracious" in his concession call and that she's looking forward to taking on the "hard work" ahead of her. "I'm very grateful," she said, "and I'm looking forward to it." 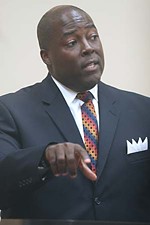