City Council convenes to a 46-item agenda on Thursday, Nov. 4, the centerpiece of which is a vote on citywide recycling (see "City Hall Hustle"). Also on the eco-agenda: approval of the Parks and Recreation Department's Long Range Plan (Item 9), an update on the Austin Climate Protection Plan (Item 27), and an economic analysis of a new convention center hotel Downtown (Item 28). Also up for approval: $190,000 in new legal fees to represent fired Austin police Officer Leonardo Quintana, this time against Sir Smith, wounded by Quintana in his fatal shooting of Nathaniel Sanders II (Item 6). An item from Randi Shade and Lee Leffingwell would support legislation to increase the city's contribution rate to the Austin Police Retirement System as spelled out in 2009 negotiation, bumping contributions from 19% to 21% by 2012 (Item 24). The zoning agenda includes upzoning requests for 207 Chalmers in Central East Austin (to create 21 "live/work" units; Items 31, 32) and 2205 E. 12th in the Rosewood neighborhood (to convert an abandoned church into a recording studio; Items 35, 36). Also expected are three historic zoning requests (Items 43-45). – Wells Dunbar

City Council's Citizen Communi­ca­tions period – when speakers address council for three minutes on a topic of their choice – is a hotbed of anti-fluoridation activists who say that the fluoridation of Austin's tap water fails to provide health benefits and may be harmful, especially to infants (see "Unstable Element," Nov. 27, 2009). Now they've enlisted some big (water) guns in their fight. At noon, Thursday, Nov. 4, Fluoride Action Network nationwide Director Paul Connett will address council on the supposed ills of the additive. It's part of a multistop swing through Austin Nov. 4-9 in support of his new co-authored book, The Case Against Fluoride. "If you picked up a book that described a government plan to put a hazardous industrial waste product in the public water supply to deliver a topical medical treatment ... you might well think you had picked up a science-fiction novel," reads the book's introduction. Fiction or fact? Depends who you trust. Panel discussions: Thu., 7pm, UT Thompson Conference Center; Tue., 7pm, Huston-Tillotson University, King-Seabrook Chapel. Book signings: Friday, 4pm, Borders Books (3309 Esperanza Crossing); Saturday, 2pm, Casa de Luz; Saturday, 7pm, Brave New Books. See www.caseagainstfluoridebook.com. – W.D.

Austin Police were involved in an early morning shooting Nov. 2 in far North Austin after police say a man opened fire on officers responding to a domestic call. The incident began around 5am, when the Austin Fire Department responded to a medical call at a home on Tomanet Trail; police also arrived at the scene, and when they opened the front door of the house, 26-year-old Howard Hanh Huynh opened fire, according to the Austin Police Department. Officer Jason Martin returned fire, and the man fled. Inside the home, police found another 26-year-old male – later identified as Huynh's housemate, Phu Vinh Troung – dead from gunshot wounds inflicted before AFD and APD arrived at the scene. Soon after police entered the house, officials said, officers heard shooting down the street. At a second house down the road, they found a woman who had been shot in the stomach. The shooter then fled on foot to a nearby Jaguar dealership, where he allegedly pointed an assault rifle at police. Officer Will Ray fired at the shooter, who was pronounced dead at the scene. Ray was involved in another shooting in 2008 after a robbery suspect wearing a bulletproof vest brandished an AK-47 while leading police on a chase in Northeast Austin. At press time, police had not released names of the female victim. – Jordan Smith 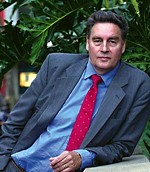